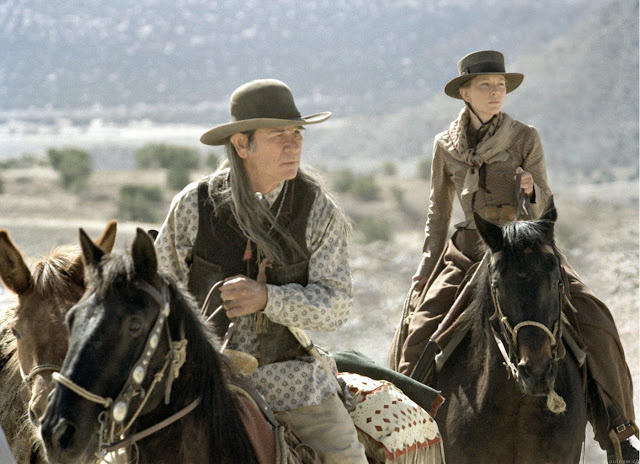 Directed by Ron Howard
Starring Cate Blanchett, Tommy Lee Jones, Eric Schweig, Evan Rachel Wood, Aaron Eckhart
This was the more prestigious major Hollywood Western to come out in 2003 , despite being made under the stewardship of horse opera veteran Kevin Costner, attracted nowhere near the level of expectation that Ron Howard’s project did. The reasons for this are fairly obvious. Costner’s career was already on the down slope, while The Missing was a prestige picture, packed with Oscar worthies and clearly designated as an Academy hopeful even before it was released.
It just goes to show that saying something doesn’t necessarily make it true of the two,  is by far the more successful film. A lot of that comes down to its innate modesty – it’s just a good, simple story, well told. The Missing, on the other hand, reaches too far. There’s no central thesis in evidence, but rather a grab-bag of disparate ideas and notions all crammed into one movie. And while some of these are interesting in and of themselves, as a whole it’s less than the sum of its parts.
The story follows tough-as-nails frontierswoman Maggie Gilkeson (Cate Blanchett) as she attempts to rescue her daughter Lily (Evan Rachel Wood) from the bloodthirsty Apache raider El Brujo (Eric Schweig). She is aided by her estranged father, Sam Jones (Tommy Lee Jones), who had abandoned her and her mother some years previously to go and live with the Apache.
The obvious influences here are the revisionist cavalry films of the ’70s, such as the brutal Ulzana’s Raid and Soldier Blue, although there are also echoes of Peckinpah’s earlier Major Dundee. These movies used the Indian Wars as a sometimes less than subtle allegory for the conflict in that was raging at the time, and at points positively reveled in the violence and bloodletting that this approach afforded them – Robert Aldrich’s Ulzana has to be seen to be believed. Howard dabbles in this approach, and there are moments in the film that are just chillingthe death of Maggie’s lover, Brake (Aaron Eckhart), wrapped in raw cowhide and cooked to death over a slow fire, springs immediately to mind.
But Howard shies away from fully embracing this kind of cinematic atavism, and the modern concerns that he has woven through the fabric of the narrative are jarring. Maggie’s position as a proto-feminist superwoman doesn’t quite gel with the overall tone of the film, and while the broken dynamic between her and Sam is obviously supposed to generate an opposing tension to the main story thrust, it’s hard to really careboth characters are so inherently decent, the audience just knows that, in the end, they’ll make the right choices to see Lily returned safe and the evil El Brujo vanquished.
El Brujo is probably the most interesting character we’re presented with. The name is Spanish, and translates roughly as “The Sorcerer” or “The Witch.”  An Apache holy man, there is a rationale behind his acts of depravity, though it is unknowable to us. This approach makes the character far more terrifying that a mere bandit knowing that, to El Brujo, the cutting out and burying of a man’s heart, or the hanging of live rattlesnakes in a tree, is not just logical but perhaps necessary, according to the lights that guide him. It’s this thin veneer of the supernatural, this brief glimpse of a bizarre and threatening moral and spiritual system, that gives The Missing some much needed flavour.
Despite strong performances and an effectively grimy and lived-in aesthetic, the film’s lack of focus prevents it from being rated too highly. Western aficionados will glean some enjoyment here, as will fans of the actors involved, but it’s certainly not a film that demands to be revisited too often.
TRAVIS JOHNSON