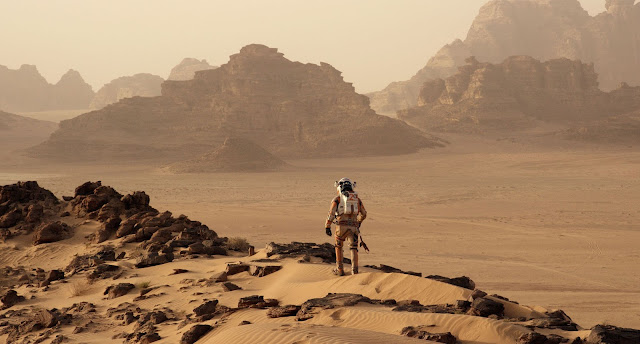 He’s made some of the best films of all time – a C.V. that includes Alien and Blade Runner is nothing to sneeze at – but has stretches of mediocrity that would scupper most careers. 2000’s Gladiator resurrected his reputation after a string of under-performing works, but his output since then has been hit and miss, too; Prometheus might have its (misguided, tone deaf) defenders, but it’ll be a long time before Exodus: Gods And Kings gets a sympathetic critical reappraisal. To be a fan of Scott is to put yourself in a position where you’re going to feel let down more often than not.

Then, every so often he knocks one clean out of the park and you’re reminded that, with a strong script to match his impeccable visual style, Ridley Scott really is one of the all time greats. The Martian is a total home run: one of the best films of the year, up there with Alien and Blade Runner, and easily eclipsing everything he’s done since, say, Thelma And Louise.

Adapted from the self-published novel by Andy Weir, The Martian puts the old Robinson Crusoe On Mars bit through the hard SF process, giving us the story of astronaut Mark Watney (Matt Damon), who struggles to survive on the hostile surface of the red planet after he is injured in a dust storm and the rest of his expedition, believing him dead, evacuate and head back to Earth. Knowing it’ll be years before a rescue mission can find him, Watney turns his analytical, pragmatic mind and can-do attitude to the immense problems of both letting NASA know he’s still alive, and staying alive until they can do something about it.

Going in, you might picture The Martian as a kind of off-world Cast Away, with the majority of the film centred on Watney’s solo adventures but the film, scripted by genre fave Drew Goddard, follows a tripartite structure. Not only do we spend time with Watney, we also spend time on Earth with NASA, and with the crew of the Hermes – the Mars mission spacecraft – who, for much of the film, are not told of Watney’s survival.

The NASA team – divided between the Mission Team, headed by Chiwetel Ejiofor’s Vincent Kapoor, and the propeller-heads of the Jet Propulsion Laboratory, led by Benedict Wong’s Bruce Ng – have to contend with not only the practical considerations of mounting a rescue mission, but also the political implications of admitting that they’ve left a man behind. Early on in the film, NASA head Teddy Sanders (Jeff Daniels) announces Watney’s death at a press conference – publicly correcting that, and forefronting the peril Watney now finds himself in, could jeopardise future funding and missions. Kapoor, along with flight director Mitch Henderson (Sean Bean) argue the opposite – that Watney’s rescue will be a publicity coup (and, you know, the right thing to do).

It sounds like Sanders is being positioned as a villain here, but there are no bad guys in The Martian, only people with different perspectives on the problems at hand. Sanders isn’t being callous about Watney – he’s being understandably pragmatic, weighing the potential cost of a public rescue attempt against the incredibly long odds of success. It’s also for practical reasons that the Hermes crew (which includes Jessica Chastain, Michael Pena and Kate Mara) are kept ignorant of Watney’s plight – they need to concentrate on the dangerous task of re-entry, not fret about their comrade.

One thing The Martian does incredibly well is illustrate the kind of people who are attracted to bleeding edge science, engineering and exploration – and that’s weird people. Weird, driven, brilliant folks who thrive in high pressure, high challenge environments, whose strange genius comes out in weird idiosyncrasies and habits. Donald Glover’s hyperactive astrodynamics engineer is the most obvious example here, but everyone is of a similar stripe: witness mission commander Lewis’s (Jessica Chastain) love of disco, or take one look at the happy mutants of the Jet Propulsion Laboratory.

Yet the film doesn’t treat these people like hothouse flowers, instead welcoming the viewer into their world. In The Martian, science is cool, being smart is cool, and smartly using science to stay alive on Mars is really fucking cool. This agenda is all centered on our man Watney, who is at once crazy-smart and easily identifiable (it helps that he’s played by the ridiculously likeable Matt Damon). Watney is a scientist, yeah, but not in the usual pulling-crazy-ideas-out-of-thin-air movie type. Watney is a guy who is very good at his job (he’s a botanist) and who applies principles and rules he’s learned to problems in front of him, one step at a time. The joy of watching Watney tackle his situation is akin to the satisfaction you get watching a master carpenter at work – you grasp the logic and skill at play, and admire the dedication and talent it takes to wield them.

Watney is also a very funny guy, in a deadpan, smart-aleck way. In fact, one of the most surprising elements of The Martian is how funny the whole thing is. Watney deals with stress through humour, celebrates success with humour, makes light of his failures with humour – he’s basically cracking jokes the whole time. It’s an unexpected joy: Ridley Scott is not known for his comedies, and even his best works are either fairly joyless or else falter when attempting to elicit a laugh.

What Scott is known for is his flawless cinematic eye. Sir Ridley is a world builder, at his best when he’s evoking the distant past or the imagined future. Here, he’s extrapolating real world science and theories to build a convincing near-now milieu. The world of The Martian is almost ours, but it’s one where manned flights to Mars are a real thing. If you want to have fun, think of it as an alternative present, one where NASA hasn’t been financially gutshot by succeeding administrations to the point where privatised space travel seems to be the way of the future.

Of course, any similarity to our world goes out the window when we’re actually on another, and Scott frames the sweeping red vistas and towering mountains of Mars with effortless majesty, positioning Watney and his little survival habitat in a way that brings home both the enormity of his predicament and the blind, brave hope that makes humans fling themselves out into the boundless unknown. It’s amazing work.

It’s all amazing work. The Martian is one of the very best moves of the year, functioning as a rip-roaring adventure, a science-positive treatise on human ingenuity, a celebration of inquisitiveness and curiosity – hell, even a workplace comedy. It is vast; it contains multitudes, and it’ll be a rare bird who doesn’t find this off-world expedition thoroughly engrossing.