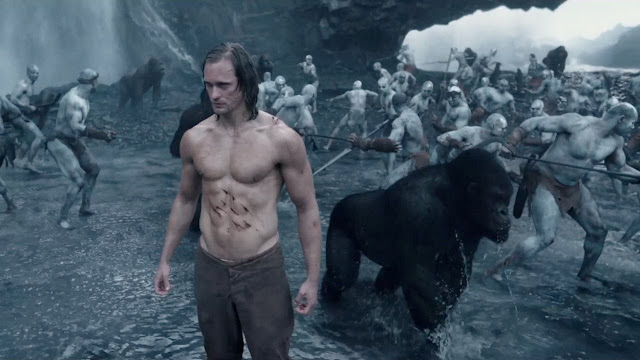 The challenge in bringing Edgar Rice Burroughs’ venerable jungle hero to the big screen once more is twofold: 1) how do we do something new (or at least not too hoary) with the character while staying true to what makes him, well, Tarzan, and 2) how do we reconcile the character’s pulpy and often problematic nature with modern sensibilities?

David Yates’ take on the property tackles the first by starting with Tarzan (Alexander Skarsgard) having long left the jungles of Africa for Victorian England and his identity as John Clayton, Lord Greystoke; thus we meet the fabled ape man as a distinguished gentleman, albeit one still physically and psychologically marked by his experiences being raised by a troop of apes. It neatly sidesteps most of the concerns inherent in the second by having Tarzan be recruited by real life anti-slavery hero George Washington Williams (Samuel L. Jackson) to investigate claims that the Belgian Congo is being savagely oppressed by the colonial administrators of King Leopold (historical spoiler: it was, and the version depicted onscreen is considerably lightened for general audiences). Thus the cruder racial assumptions of Burroughs’ source material and out two-fisted jungle action comes to us in the service of emancipation and self-determination.

And it works. The Legend of Tarzan delivers pretty much exactly what it promises: fast paced, old-fashioned action tempered for 21st century sensibilities. Skarsgard makes for a great Tarzan, albeit a reluctant one; his arc has him resisting his primal nature for as long as he can before circumstances force him to embrace his animal side. Skarsgard has always been a very physical actor even when he’s playing more cerebral roles, and it serves him extremely well here. His Tarzan carries scars and deformities due to his formative years in the wilderness – there’s a great bit of business about his hands being shaped by a childhood spent on all fours – but it’s the way he carries himself that really sells it.

His Jane is  sudden superstar Margot Robbie, who plays her as Tarzan’s equal even when the plot machinations make her a damsel in distress when she’s captured by the villain of the hour, Leon Rom (Christopher Waltz doing what he does when he plays a pantomime baddie). Interestingly, Rom is another real life figure inserted into the fantasy, making this a Tarzan story that embraces the notion of alternative history more than any other this side of Philip Joe Farmer’s Tarzan Alive!.Robbie’s Jane is all feisty quips and quiet cunning, using her intelligence and knowledge of the African jungle to her advantage over Rom and his men. Once again this is an element the filmmakers are trying to balance, giving us a Jane with enough agency to be her own character will still functioning in what is, let’s face it, a pretty tired plot niche.

But familiar plot mechanics are part of the joy of pulp literature and film, and Yates and his screenwriters, Adam Cozad and Craig Brewer know there are certain beats that need to be hit for this to be a proper Tarzan adventure. Thus, we get Tarzan fighting apes (in a nod to verisimilitude, he fares less well than tradition dictates, Tarzan communing with animals (there’s a moment with a pride of lionesses which is just beautiful, Tarzan dueling an evil native chieftain (Djimon Hounsou playing a character with more reason to be angry with our hero than is normally considered), Tarzan swinging through the air (the entire film pretty much builds to a single shot of this, and when it pays off it’s glorious), and, of course, the Tarzan yell. As a director, Yates is less comfortable with staging action sequences than he is framing majestic shots of the jungle or savanna, but he’s competent enough to make it all work; there’s a fight scene where Tarzan takes on a trainload of Belgian soldiers that is just wonderful, and when Yates is called upon to lend stunt or chase sequences (as opposed to fights) a bit of scope and awe, he does so with aplomb.

There are a couple of bum notes. Jackson never entirely convinces as George Washington Williams (a man you should definitely Google), choosing instead to do one of his “I’m Samuel L. Jackson” turns instead, but he’s entertaining enough that it’s not a deal breaker. And while the CGI animal cast are plenty convincing, this is a year when the high water mark for photorealistic animals was set by The Jungle Book, and Tarzan can’t help but fall short – but it’s a failure only by comparison. Besides, Tarzan has a better story, which counts for more in the yes of any sane viewer.

Which doesn’t make you insane if you don’t enjoy The Legend of Tarzan, of course; it’s hard to say who the market is for 90 proof pulp adventure these days. If you think you might be in that demographic, though, you’ll have a good time here.