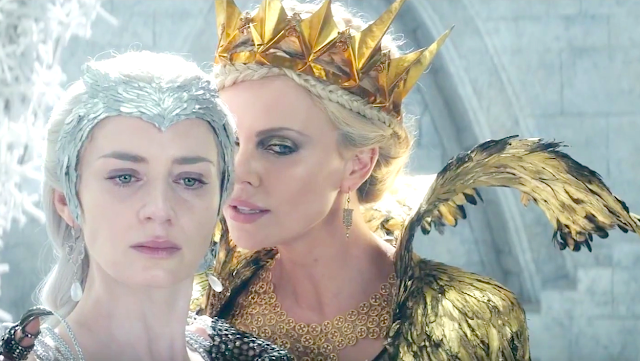 I don’t think anyone was particularly keen for a follow-up to 2012’s not-actually-terrible Snow White And The Huntsman, but here it is anyway with most of the old gang back together, with the notable exceptions of female lead Kirsten Stewart (busy), Bob Hoskins (dead) and director Rupert Sanders (disgraced).

What’s genuinely surprising is that, like its predecessor it’s not too bad, while at the same time never crossing fully over all the way into “actually good”. Perhaps benefiting from a combination of low expectations and a clear-eyed understanding of where it is fated to sit on the Grand Ziggurat Of Cinema, Winter’s War cheerfully magpies from a number of better fantasy films to construct something that, more often and not, feels like the lightly rewritten campaign notes from a sensitive 16 year old’s Dungeons & Dragons game. If that analogy makes sense to you, you’ll probably get something out of the proceedings.

Plotwise, the evil Queen Ravenna’s (Charlize Theron) magic mirror is still around, and Snow White (unseen – no KStew this time around, remember?) is keen to get rid of the evil thing. Freya the Snow Queen (Emily Blunt), sister to Ravenna, wants to get her hands on it, to further her plans of conquest. Snow White tasks the titular Huntsman, Eric (Chris Hemsworth), with disposing of the former and checking the latter. Handily, Eric has history with Freya: he was the top head-lopper in her army when she killed his fellow Huntsman (Huntswoman? whatever…) and forbidden love, Sara (Jessica Chastain). So the stage is set for a bit questing, a bit of revenging, and a lot of CGI-ing.

As noted, screenwriters Craig Mazin and Evan Spiliotopoul pilfer freely from a wide variety of extant fantasy properties. Eric’s origin, which we see in flashback, is a mix of Conan The Barbarian and Braveheart, the presence of Freya obviously invokes Disney’s Frozen and its fairytale roots and, like the previous film, Ridley Scott’s Legend looms large as both a design and narrative inspiration. Comic relief comes in the form of a gaggle of dwarfs played by Nick Frost, Rob Brydon, Sheridan Smith and Alexandra Roach, and pathos in the relationship between Eric and the not-as-dead-as-previously-believed Sara, and especially the interplay and, importantly, the power dynamic between Ravenna and Freya.

Yes, Ravenna returns, but that’s hardly a spoiler – she’s a heavy element in the marketing mix after all and besides, this is a fairy tale movie, and one that runs on fairy tale logic. Freya has literally banned the concept of love from her kingdom following the death of her baby years before, while Eric repeatedly proclaims that his prowess as a warrior and hero comes from his love for Sara. A bit hackneyed? Maybe, but it’s a step up from the adolescent sturm und drang of, to pluck a recent garbage fire out of the air, Batman V Superman: Dawn Of Puberty.

It’s also quite a beautiful film. The design elements are all individually exquisite, every now and then coming together for a composition that verges on the sublime. It’s the little elements, like the pattern of Freya’s carefully braided heir, the moss growing on the animals of the fairy bower sequence, the rough-hewn appearance of Freya’s elite huntsmen (I mean, they’re basically Tolkien Rangers, but they’re good looking Tolkien Rangers). Colleen Atwood’s on costuming duties, and her work at least ensures that there’s always something on screen to please the eye, even if it’s just a human figure.

The Huntsman: Winter’s War does was it says on the tin, and it does it to the best of its modest but willing abilities. Like the recent Gods Of Egypt, it’s by no stretch a great film, but if you’re a fan of the genre it’s a fun one.