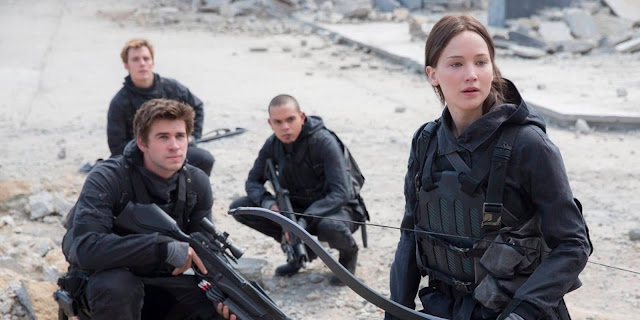 The Hunger Games: Mockingjay Part 2 has a problem, and that problem is that from an artistic perspective it really should not be a Part 2. Overly long and poorly paced, it clearly demonstrates that the decision to split the third volume of Suzanne Collins’ dystopian YA bestseller into two films was financial choice, not a creative one. Which is a damn shame, because when the film works, it really is the business.

That first third or so, though – yeesh. Director Francis Lawrence knows his way around an action sequence, and he can drape a key dramatic moment in portentous but effective sturm und drag, but he fumbles small, human moments pretty consistently. Lawrence seems to think that a lack of affect is the most effective way to convey complex emotions, and maybe for a more gifted filmmaker that would be true, but the result here is that when, say, Peeta is lamenting his untrustworthiness for the fifth time (he’s been turned into a Manchurian Candidate by the eee-vil President Snow) or Katniss (Jennifer Lawrence) is grilling non-event Gale (Liam “The Other” Hemsworth) about a particularly murderous bit of guerrilla tactics, you’re drumming your fingers and waiting for the next action sequence.

The thing is, Mockingjay Part 2 is framed as an anti-action film. It’s not about the thrill and spectacle of combat, but the sickening cost of victory when fighting an asymmetrical war. Peeta has been tortured by the Capitol, as has Jena Malone’s Johanna, while a goodly selection of the supporting cast pay a more final price for their rebellion.

Yet to what end? The new boss – Julianne Moore’s steely President Coin, leader of the rebels – isn’t above spending lives for political gain and, as mentioned, the tactics the rebels employ result in more than a few civilian deaths. It’s refreshing to see a movie – a teen-oriented movie, at that – blur the moral lines between protagonist and antagonist, even as it comes at the cost of comfortable catharsis. Tonally, it’s always been clear that The Hunger Games series was not going to end in a clear cut ethical victory; it’s always been about the cost of victory, the cost of agency, the cost of choice.

And here we do get to see Katniss make some choices and wear the consequences. Coin and company still see Katniss as a valuable propaganda tool rather than a soldier, but our bow-wielding heroine goes off the reservation and attempts to assassinate Snow during the big push into the Capitol. This takes her and her team – Peeta, Gale, Finnick (Sam Claflin), Cressida (Natalie Dormer) and a few new bods – through a deserted urban landscape festooned with “pods” – defensive installations that unleash to kind of traps and critters usually found in the Hunger Games arenas.

It’s a conceit that half works; while the action beats function well as action beats, the cartoony elements of the series have always sat uneasily beside its more complex themes. It’s not as bad as Catching Fire, which saw them flat out recycle the first installment’s first act, there’s something about Katniss’s emotionally scarred freedom fighters going up against booby traps and monsters rather than actual human beings that feels like cheating. Indeed, the film keeps us some distance from actual human-on-human violence for much of its running time: we know intellectually that bombing a munitions plant to bury the civilian workers within alive is a bad thing, but we never really get to see the human cost of such choices.

That’s not a cry for more gore; there’s nothing to be gained from shunting The Hunger Games a few rungs up the classification ladder, no matter what the Battle Royale diehards say. But there is a disconnect between the themes we are being told and the action we are being shown, and it hurts the material.

We get there in the end, though. The Hunger Games series is politically astute almost to the point of cynicism, and at the very least it takes the most cynical interpretation of the term “revolution.” Mockingjay Part 2 might be a war movie for most of its length, but it’s more concerned with peace and the choices that have to be made not in the heat of battle but in the cold light of the aftermath, where revenge and justice must be weighed against each other. This is also, notably, when we finally see a clear and deliberate act of violence from a character we know.

Ultimately, The Hunger Games as a whole presents a world where choices are never clear, morality is never black and white, and victory always comes at a cost. It’s fascinating that it’s so popular, refusing to offer trite happy endings like pretty much every blockbuster franchise from Star Wars to the MCU. Mockingjay Part 2 works as a climactic episode in those terms, in that we are ultimately denied a cathartic victory and left, like the surviving characters, to parse the events and decisions of the preceding conflict for ourselves. It’s probably the smartest of the recent YA flood, which means it’s also the least pandering. It’ll be interesting to see where it sits in the cultural firmament down the track.