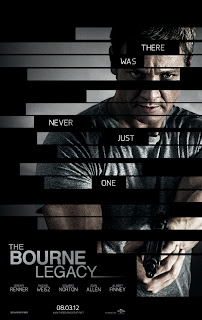 Same Make, Different Model
Directed by Tony Gilroy
Starring Jeremy Renner, Rachel Weisz, Edward Norton, Stacy Keach, Joan Allen, Albert Finney, Scott Glenn
The Jason Bourne series is quite rightly considered a milestone in modern action cinema, as well as being a tidy little cash cow to boot. It comes as no surprise that Universal wanted the series to keep on rolling, even after actor Matt Damon and director Paul Greengrass had their fill of the amnesiac assassin. Drafting in Tony Gilroy – he had a hand in writing the first three films – as director was a smart move, as was tapping up and comer Jeremy Renner to play the new lead. Still, the question remains, can Bourne be Bourne without, well, Bourne?
When Jason Bourne’s activities bring too much attention to the CIA’s nastier covert operations, shadowy G-man Eric Byer (Edward Norton) is brought in to clean house. This involves terminating anyone who knows too much about the Company’s dirty laundry, including a number of special operatives. One of the targeted agents is Aaron Cross (Jeremy Renner), a member of Operation Outcome, a program where operatives are enhanced, physically and mentally, by regular does of medication. When the planned hit on Cross goes awry, he goes on the lam, but seeks out Outcome scientist Marta Shearling (Rachel Weisz), who is also on the hit list, in the hopes of securing more meds.
It’s a chase movie, essentially, with a few bells and whistles thrown in to give the appearance of freshness. Cross’s chemical dependency is a nice touch – without his intelligence enhancers, he’s well below normal, and the spectre of returning retardation gives him a more interesting motivation than merely survival. Anyone unfamiliar with the older films won’t have too much trouble figuring out what’s what, and some familiar faces crop up in what are essentially cameos in order to reassure existing fans that, yes, this film takes place in Bourne’s world, if not his actual life.
Yet there’s something missing – some ineffable quality. Renner is a great lead, bringing a more visceral and dangerous quality to the franchise, and there’s plenty of gunplay, martial arts mayhem, and chases, but it’s starting to seem a little rote by now. It’s ironic, considering the way that Bourne revitalised the action genre not all that long ago, that what set it apart in ’02 is what makes it seem a little tired in ’12. The film’s lacklustre climax and resolution doesn’t help matters either; the final action sequence feels tacked on, and the film doesn’t so much end as simply stop – clearly they’re gunning for a sequel.
The Bourne Legacy is polished but perfunctory, bringing all the obvious appeal of the franchise, while skimping on the deeper political and emotional concerns that made preceding films so resonant. It’s not a terrible film, but it’s a fairly undistinguished one, and it feels like all concerned are just treading water until Damon can be enticed back into the fold.
(First published in X-Press issue 1331, 15/08/2012)