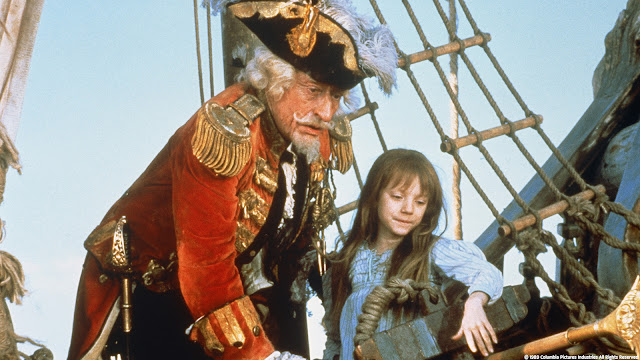 I’ve been idly ambling through the pages of Gilliamesque, Terry Gilliam’s brisk and thoroughly entertaining memoir, and off the back of that decided to revisit some of his less familiar films. The Adventures of Baron Munchausen I’d seen maybe once, back when it first hit VHS, but I’d picked a Blu Ray copy off the corpse of Planet Video, and so was well positioned to give it a second look. At some point I’ll track down a copy of Jabberwocky and give that another run-through – I know I must have seen it as a kid, but I hardly remember anything about it, so it’s probably been around 35 years and that’s way too long. Hell, I own a copy of Tideland, and almost nobody saw that – I should at least be au fait with all the Gilliam films people profess to actually like if I’m going to call myself a fan.

And I am a fan – Gilliam is one of the greats, not because every film he makes is perfect, but because every film he makes is so, to steal a term, Gilliamesque. There are films of his – The Fisher King and Brazil – that I can watch at the drop of a hat, and there are films of his – The Brothers Grimm – that I’ll trot out every couple of years to see if age and distance have improved them (they haven’t – The Brothers Grimm is pretty wretched). His overall oeuvre is one of my favourites of any filmmaker.

1988’s The Adventures Of Baron Munchausen is a fascinating film because it contains all of Gilliam’s strengths and weaknesses writ large. It’s incredibly visually inventive, playful, expansive and fun, but also flabby, self-indulgent and sometimes narratively murky. If you like Gilliam, you’ll find plenty to like here; conversely, if you dislike Gilliam…

Opening in the “Age Of Reason,” Munchausen sees a ragtag group of actors putting on a play about the good Baron in a city under siege by Turkish forces. Their performance is interrupted by the appearance of an ageing nobleman (John Neville). He’s the real Munchausen, the dusty gent declares, and not only that he’s the reason the Turkish Sultan is currently shelling their city down around their ears. Taking Sally Salt (Sarah Polley in her film debut), the daughter of the lead player,  along, he escapes in a makeshift hot air balloon and sets off in search of his old companions, whose help he will need to lift the siege.

The literary Baron Munchausen is, of course, an inveterate liar and teller of tall tales, and this gives Gilliam free license (as if he needed it) to go hog wild, eschewing any notions of physical reality, causality and the humdrum working of the real world in favour of wild flights of imagination. In this respect, it’s closest stablemate in Gilliam’s body of work is probably Time Bandits – a film which is often, along with Munchausen and Brazil, grouped together as a loose thematic trilogy.

That theme is the power of imagination and the value of art and creativity in the face of despair, and here it’s perfectly visually encapsulated early on with a shot of a family who have set up house in a bombed-out statue of a horse – they are literally being sheltered and protected by a work of art! Gilliam regular Jonathan Pryce crops up as The Right Ordinary Horatio Jackson, an officious bureaucrat whose job seems to be to stamp out pointless flights of fancy and enforce adherence to rationality. He’s the real villain here – the Sultan (Peter Jeffrey) at least has an ostentatious sense of style – which he immediately proves by having a heroic soldier (played by Sting!) executed because his courageous actions are apparently demoralising to ordinary fighting men.

Yet, while there are antagonistic figures scattered through the story, such as Robin Williams’ King Of The Moon and Oliver Reed’s Vulcan – the film is not very interested in conflict. Structurally, it’s just a set of loosely connected vignettes in sumptuous locations, some rather wonderful – that would be the sojourn in Vulcan’s suitably volcanic island lair, where the old classical god of the forge complains about modern workplace relations – and some less so, such as the sequence set on the moon, which drags on and on. Its all beautifully designed in a lovingly detailed Baroque style, all filigree and lush curves and general background noise and weirdness.

In the foreground is a pretty great cast. Munchausen is in search of his old adventuring buddies, each of whom has a special gift. Berthold (old Python mate Eric Idle) is the fastest man in the world; Adolphus (Brazil co-writer Charles McKeown) is a marksman of superhuman accuracy; Albrecht (Winston Dennis) is the strongest man in the world; and Gustavus (Time Bandits veteran Jack Purvis) can blow with supernatural strength and speed. Each of these has a counterpart in the acting troupe of the first act, played by the same actors, underlying the dubious provenance of the Baron’s narration. Also, when they’re found in the course of the story, they’re all old men, broken down by the weight of years until they’re reinvigorated by the Baron’s enthusiasm (read: lies). This means each actor plays three different versions of the same character, which is rather neat.

One striking thing about the film is that it never tries for a realistic aesthetic at all. Gilliam shot at Rome’s famed Cinecitta Studios, staging his film mostly on elaborate sets, and he never tries to hide the fact that the film is set-bound. Models look like models and backdrops look like backdrops, but they’re beautiful models and backdrops – anyone complaining about being able to tell that these elements are fake is completely missing the point. The whole film is fake, the whole film is about being a fake, the whole film is about the value of fakery and fiction. In a realistic film, you don’t get Robin Williams as a disembodied floating head contemplating the mysteries of the universe, and where’s the fun in that?

American distributor Columbia Pictures torpedoed the film on release and it pretty much sank without a trace in the US market, although it did better in Europe and Australia. Still, it seems to be a largely forgotten work, which is a shame – while not flawless, it’s still Gilliam operating at the height of his considerable powers, and that’s something that’s always worth looking at. When it’s firing on all cylinders, The Adventures Of Baron Munchausen is an epic paean to the power of unfettered thought.