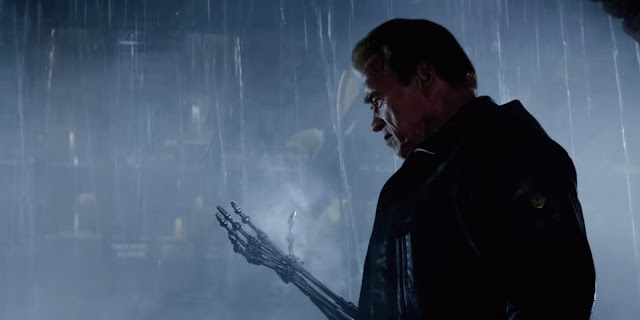 I don’t see how you can be a Terminator fan and like Terminator: Genisys.

That sounds really elitist, but hear me out: I think we need to make a distinction between The Terminator, a really great, stripped down B movie that spawned a really great, big budget sequel, and the Terminator franchise, which is a kind of terrible creative white elephant that studios can’t seem to leave alone.

They can’t leave it alone, of course, because they apprehend that it’s worth a lot of money. The problem is that, as evidenced by Terminator 3: Rise Of The Machines, Terminator: Salvation, Terminator: The Sarah Connor Chronicles,* and now Terminator: Genisys, any attempt to extend the storyline utterly compromises what makes The Terminator so good. You can make a Terminator movie filled with all the signifiers that we’ve come to identify with the property – time travel and endoskeletons and T-1000s and shotguns and motorcycles and leather jackets and wrap-around sunglasses – but there’s a law of diminishing returns in effect. I don’t think it’s actually possible to make a good Terminator film any more.

James Cameron’s 1984 flick is just so elegant. It’s a closed system. As Michael Biehn’s Kyle Reese says, “Nobody goes home, nobody else comes through. It’s just him and me.”  There’s a fantastic fatalism to the movie, a downbeat understanding that the apocalypse cannot be prevented, only prepared for and weathered. As I said, it’s a B movie (there’s nothing wrong with B movies, rest assured), but it’s also a tightly plotted thriller that sets up its own inviolable rules and plays by them, to great narrative and thematic effect. Kyle Reese has to die, Sarah Connor has to survive, the terrible future must roll towards us. It’s a film that is filled not just with great action scenes (and horror beats) but pathos, sacrifice and humanity as well.

Terminator 2: Judgement Day is a great sequel for a number of reasons, not the least of which is the way it flips so many of the assumptions of the first film in ways that feel organic and true. The most obvious is that Schwarzenegger is playing a heroic figure as opposed to an unstoppable antagonist, but the film also reverses the fatalistic determinism of the original film, allowing for some plasticity in the timeline and a future that isn’t necessarily a blighted nuclear wasteland. Fair enough, good job, great movie: I would never say T2 is a better film than its predecessor, but its a pounding, propulsive, monster truck of a movie, singularly responsible for raising the bar for tentpole action cinema, while simultaneously remaining narratively consistent and thematically on point – and if you think that’s easy, well, you better strap in.


The thing is, T2 also directly contravenes Reese’s statement about it just being him and the Terminator in the fight. It’s a choice made by necessity – if there was no wiggle room there, we wouldn’t get to see Arnie and the great Robert Patrick bang their metal skulls together, and the world would be all the poorer for it – and if the franchise had ended there, as it seemed natural for it to, then it wouldn’t be an issue.


The problem is the way that little crack in the story has been levered wide to allow for all kinds of rubbish to be justified. Two warriors go back in time? Why not four? Why not six, and one of them’s a nanobot woman? Why not even more (that’d be The Sarah Connor Chronicles, which treats time travel like public transport)? Why not the same guys, plus an extra Terminator, plus a T-1000, and they go back to 1984, and 1973, and then they jump to 2017, and Ash is – I mean John Connor is a goddamn robot?**


I didn’t have a stroke while typing that last sentence, by the way – that’s the plot of Terminator: Genisys.


When future resistance leader John Connor (Jason Clarke) sends guerrilla fighter Kyle Reese (Jai “no franchise I can’t fuck up” Courtney) back in time to protect his mother, Sarah (Emilia Clarke) from assassination, Reese arrives to find that Sarah is well up on the current state of play regarding AI-mandated nuclear annihilation and time travelling cyborgs. Sarah has been raised by a good Terminator she calls Pops (Arnold Schwarzenegger) ever since he saved her from an attempt on her life in 1973. As a result, she’s already a hardened survivalist, and it’s Reese who spends the movie on the back foot, wondering what the hell is going on.


What this does is put the focus of the story directly on Reese, making him the key protagonist rather than Sarah. That’s a terrible idea, disenfranchising Sarah as a character even as it makes her ostensibly more capable. And maybe that could have been interesting, except somewhere along the way the decision was made to turn driven, haunted, PTSD-wracked Kyle Reese into a generic, wisecracking action hero.


It’s easy to blame Jai Courtney – the poor guy is a lightning rod for criticism about this film – but, to paraphrase the ’84 model, he didn’t write the fucking thing. Choices have been made in the creative process that actually go out of their way to render the previous films moot; this may actually be the first crappy sequel that truly does ruin what went before.


You could argue that, with time travel in the mix, continuity and consistency can not necessarily be taken for granted and, yeah, okay, perhaps technically you’re right, but consistency of character and theme should be a given. Genisys re-stages key sequences from the first film and subverts them in ways that might at first seem fun – there’s certainly a thrill in seeing leathery old Arnie take to buff young Arnie with a shotgun – but just seem terrible when you apply more than a second’s thought to them. In an early scene in The Terminator, Reese is like a hunted animal as he quietly loots a department store for supplies while two cops search for him; in Genisys he’s trading tough guy quips with them while they battle a T-1000. There’s no reason for it – this is ostensibly the same Kyle Reese – except for the laziness and lack of respect that permeate the entire proceedings at a cellular level. There’s no reason for it except that a great many people in positions of power in this production simply failed to give a fuck.


In effect, Genisys is saying that what went before it in the series is now meaningless; that all that pain and sacrifice and love and fear and death meant nothing, and that the characters that experienced those things pretty much do not exist any more. That’s not just shoddy storytelling, that’s downright offensive. That’s showing such disdain for the material you’ve been entrusted with that it beggars belief. It is actually staggering to contemplate how little the creators of this film care about the legacy they’ve inherited. Rise Of The Machines and Salvation may have been bad movies,but you got the sense that was out of incompetence, not malice. With Genisys…


Look the action is competently handled and there’s a big, dangling sequel hook in the mid-credits stinger if that’s your thing, but you would have to be willfully lying to yourself in order to say that Terminator: Genisys is anything remotely resembling a good film. I know there’s a sizable market out there who will go and see it regardless of bad reviews and damning word of mouth, but please understand that when you do so, you’re not just encouraging mediocrity, you’re actively paying cynical people to shit all over something you purport to love. This movie is just fucking awful.

*I’m willing to hear arguments in defence of the TSCC but, really, guys, it’s an unwieldy appendage at best, and whatever it does right comes at too high a price.