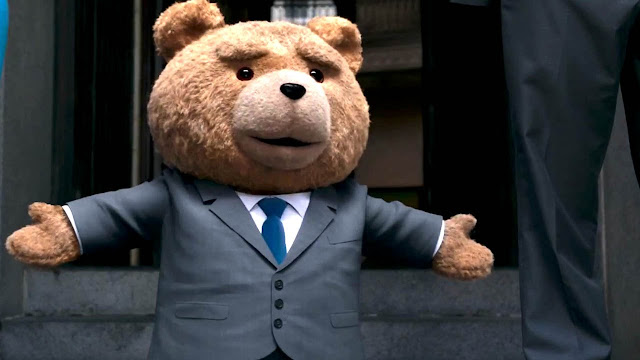 At this point of the game you’re either on board with Seth McFarlane’s brand of highbrow venality or you’re not, and exactly how much you enjoy Ted 2 is predicated on that. It’s not as good as Ted, it’s much better than A Million Ways To Die In The West, and while fans will more likely than not find enough to enjoy here, I can’t see anyone who finds McFarlane’s schtick distasteful being converted.

Ted 2 picks up a couple of years down the track from the first film. Ted is married to Tami-Lynne (Jessica Barth), but they’re struggling financially and fighting a lot. Nothing mends a broken relationship like throwing a kid into the mix, and so Ted, being sans genitals, starts looking into his options. His investigations into adoption make the government begin to take notice, and it turns out that, legally speaking, Ted isn’t a person, he’s property. In short order, he loses his job, his credit cards, his bank account, and his marriage is annulled. With nascent lawyer (and love interest for Mark Wahlberg’s John) Sam Jackson (Amanda Seyfried) in his corner, Ted fights for his personhood.

That’s a pretty heavy plot for a film that leans into the dick and weed jokes pretty heavily and has never found a minority group it couldn’t ruthlessly take the piss out of, but that’s McFarlane’s thing: he’s a highly educated, politically progressive guy who refuses to let questions of taste or propriety impugn his comedy. McFarlane is no Mel Brooks, but Brooks is clearly an influence on his work, and he’s always struck me as more joyfully, brutally irreverent than malicious.* There’s a lot to laugh at here, assuming your comedic sensibilities line up with his: if you get a giggle out of Wahlberg pulling a rack of semen samples onto himself at a fertility clinic, or Amanda Seyfried’s vague resemblance to Gollum, you’ll have a good time.

*Your mileage may vary, of course. There’s nothing so subjective as humour.