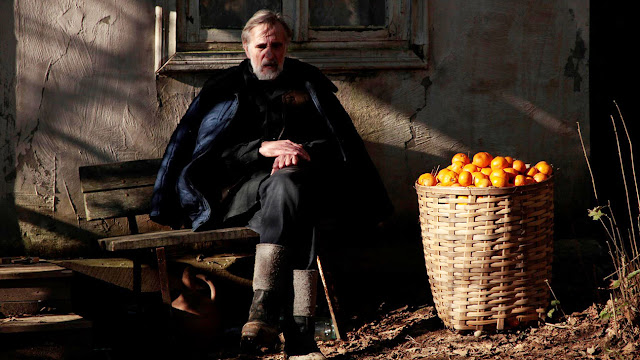 Set in 1992 during the war between Georgia and Abkhazia, Tangerines concerns two old friends, Ivo (Lembit Ulfsak) and Margus (Elmo Nuganen), who are the last inhabitants of their remote village – everyone else has bolted for safer territory. Margus has a tangerine* crop to get in, though, and Ivo has promised to make enough boxes for his harvest, so the two set about their labours, hoping to be done before the war touches them.

It does, of course, and the taciturn, moral Ivo winds up caring for two wounded soldiers: Ahmed, a Chechen mercenary (Giorgi Nakashidze), and Niko (Misha Meskhi), a Georgian. They’re sworn enemies, of course, but Ivo will brook no violence under his roof. Together, the four men form an odd sort of community, at once strangely cozy and yet perpetually under threat of violence from within and without.

Tangerines follows a relatively simple plot, with writer and director Zaza Urushadze more concerned with presenting an anti-war parable than putting us through any unnecessary narrative convolutions. Warm and surprisingly funny, it mines humour not only from its characters’ foibles, but from the sheer absurdity of both the specific situation and the nature of the overall conflict. Lembit Ulfsak anchors the proceedings, his Ivo a soft-spoken patriarch to this odd family, but the cast is uniformly strong, from Nuganen’s rough-hewn, often bumbling orchardist to Nakashidze’s blunt, belligerent professional soldier. That all are likable in their own way is a testament to the deceptively simple but deft script that makes each character distinct without drowning them in unnecessary detail.

Tragedy is inevitable in this sort of story, and here it hits harder than most, thanks to Tangerines‘ intimate scale. This was Estonia’s Oscar bid last year, and it’s not hard to see why: it’s a robust, thoughtful, unshakably moral examination of the pitfalls of war that never loses sight of its humanity.

Tangerines is playing as part of the Lotterywest Festival Films Season  until Sunday, December 20. Go here for tickets and session times.

*Actually clementines in the Engllish subtitles, a discrepancy that had me researching citrus fruits for a couple hours. To the layman, and for the purposes of the film, the difference is negligible, unless there’s some subtle, culturally specific symbolism I’m not down with.