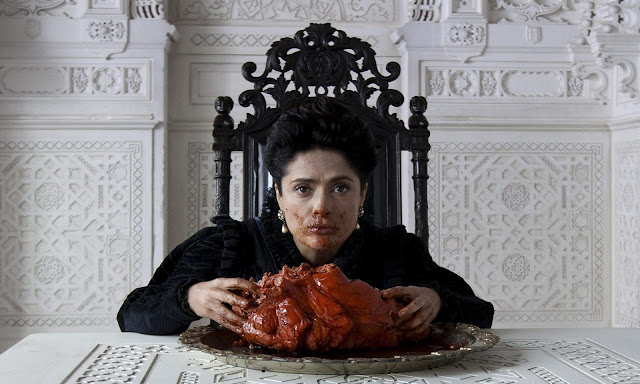 The film centres on the royal families of three different mythical kingdoms. A barren queen (Salma Hayek) eats the heart of a sea dragon in order to give her king (John C. Reilly) an heir, with tragic results. A widowed king (Toby Jones) holds a contest of wits with the hand of his daughter (Bebe Cave) as the prize, only to see it won by a gruesome ogre. A lustful,sex-mad monarch (Vincent Cassel) becomes obsessed with a woman (Hayley Carmichael) he only knows from her beautiful voice, not realising that she is an aged hag.

All three stories are enhanced and twisted by the usual fairy tale logic: curse and prophecies, witches and necromancers, transformations, spells and the off giant monster or two. It’s gorgeously shot and steeped in blood and sex – just as every good folk tale should be – reminding us that these old magical stories were not so much about great deeds and mighty battles as the treacheries and difficulties of actual life, spiced up with the odd bit of black magic.

Yet Tale Of Tales remains a strangely distant experience. The great cast can’t make the material engaging, and empathy is in short supply here – with the exception of Toby Jones’ kindly, doddering king. It’s an incredible film to look at – the idiosyncratic faux-renaissance production design alone is worth the price of admission – but it’s a hard film to really invest in; we’re simply not given enough access to the characters’ inner lives to care much about them. It’s interesting to speculate filmmakers such as Terry Gilliam or Guillermo del Toro, both adept at finding the human with the archetypal, might have made of the material.

Still, Tale Of Tales is worth your time. Garrone builds up a sustained mood of high weirdness, a 50/50 mix of whimsy and danger, that is queasily fascinating, and you’d be hard pressed to find another film where a grown man coos over a giant flea, unless there’s a Burroughs adaptation I’m forgetting.

Tale Of Tales is playing as part of the Lotterywest Festival Films Season until Sunday, January 17. Go here for tickets and session times.