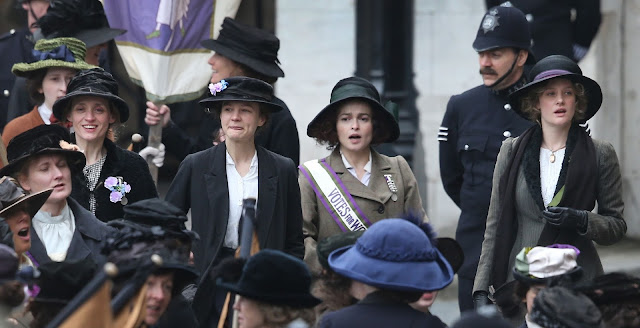 Hey team, Trav here. I unfortunately had to miss the press screening of Suffragette, but Natalie Giles saw the film and has some strong opinions on it, so I offered her an avenue to express them. In any case, she’s an actual woman-type woman, so in this particular instance I think her voice has more to offer than that of old, white, straight, male me.

I’ve got to admit, I went into this movie with some fairly lofty expectations. It’s not light subject matter, and I wanted it to be treated with the respect it deserves without being precious. If that was the goal, they achieved it even if they missed the mark somewhat, historically speaking. As a fairly staunch feminist, I’m happy with the outcome. It’s a story that had to be told and has taken too long to be told. 2015 was the year of some rather brilliant, powerful, but fictional female characters (Rey, Furiosa), so it’s refreshing to balance that out with strong female characters that are based in truth.
It is, however, unfortunate that little credence is paid to history, specifically the suffragists, who were actually the women responsible for realising the goal of Emily Pankhurst’s Women’s Social and Political Union (WSPU) several years after this film is set. The movie is bound within a limited time frame, 1912- 1913, but the vote wasn’t even partially won until 1918. The militant arm certainly stirred the movement and brought much-needed attention and press coverage, but it was the political campaigners, led by Millicent Fawcett, who won the vote through logic and rationale. They appealed to the cabinet to realise the political power behind supporting the vote, and their campaign ultimately led to victory. Unfortunately, leaflets, petitions and logic do not make film greatness. Nor do they win awards.
The tone is as it must be – dark and gritty. These women cannot be seen as beautiful, they’re warriors, and it would be inappropriate to the time and the tone to suggest otherwise. The makeup artists particularly deserve kudos for Maud’s scars. It’s a subtle reminder of what she’s endured, and reinforces her character’s journey. Maud (an award-worthy Carey Mulligan) begins as a downtrodden laundry worker, suffering at the hands of her rapist employer, and begins her course as nothing more than a subdued wife and mother. Maud’s (fictional) character development is as fascinating as the story itself; her growth begins with circumstance and a natural curiosity that leads her into some dangerous territory that results in a beautifully rounded character, transforming into a passionate social activist that the audience can relate to and rally behind.
Director Sarah Gavron has tackled some very hefty subject matter in what is only her sixth film, and she has performed outstandingly. Screenwriter Abi Morgan has previously joined her in female-led storylines, their prior collaboration being 2007’s Brick Lane, and their commitment commendable. Brendan Gleeson’s turn as Inspector Arthur Steed carries the rest of the males for much of the film. The depth of his character is positively disarming and stunning. Maud’s two dimensional husband, played by Ben Whishaw, is irritatingly pathetic.
For those that require trigger warnings: there are scenes of domestic violence, violence and abuse towards women, rape, and a particularly poignant scene between Maud and her son that will leave you a blubbering mess. Tread carefully. This may not be one for grandma.
While Suffragette is far from perfect – the second act, for instance, limps along like a wounded animal in some parts – it is a must-see movie merely for the historical significance. The rage within it is on point. It is exactly what it needs to be. Take your kids and let them bear witness to the struggle that led to this point in feminism. It’s a fantastic starting point for discussions on gender politics and, who knows, perhaps the beginning of their social awareness.
NATALIE GILES