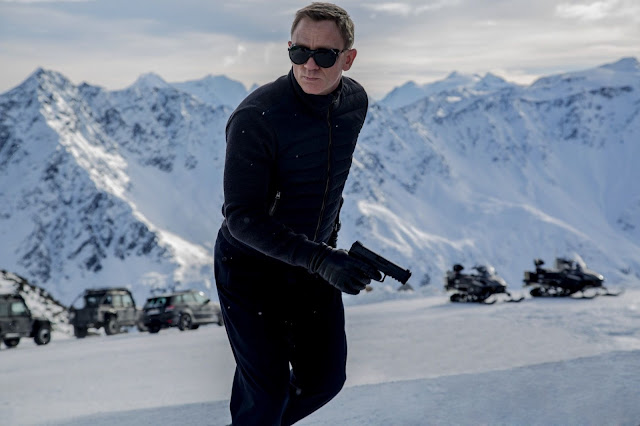 When the dust has settled and we’ve got a bit of distance and perspective, Daniel Craig will be remembered as the Bond for whom everything was personal.

Taking a leaf from the Jason Bourne playbook, since Casino Royale Team Bond have taken pains to ensure that the stakes in each film are not just existential or ideological, but exceedingly personal. This isn’t a particularly new wrinkle – On Her Majesty’s Secret Service comes immediately to mind – but in the history of the franchise it’s never been as foregrounded as it is now. Whereas previous Bonds have been motivated largely by patriotism and duty – not to mention the sheer fun of doing what he does – Craig’s 007 has been driven by his own concerns – chiefly revenge and personal obligation.

This also makes him, weirdly, the most untrustworthy Bond – the Bond most likely to be off pursuing his own agenda rather than toeing the MI6 line. That’s exactly where we find him when Spectre kicks off: slinking around Mexico City during the Day Of The Dead festival, pursuing a shadowy international assassin at the behest of the previous M (Judi Dench, cameoing via a video from beyond the grave). The current M (Ralph Fiennes) doesn’t have time for this nonsense; he’s busy fighting a bureaucratic war against C (Andrew Scott) the new head of the Joint Intelligence Service, who sees surveillance and drone attacks as the way of the future, and wants to shut down the 00 section.*

Not that any of it bothers Bond; he has a vendetta to pursue and, with the help of Moneypenny (Naomie Harris) and Q (Ben Whishaw) he’s soon jetting off to Rome on the trail of the mysterious criminal organisation, Spectre, headed by Franz Oberhauser (Christopher Waltz). Of course, old Bond hands are familiar with Spectre – or S.P.E.C.T.R.E as it was formerly known – as a long-standing antagonist, a secret cabal of terrorists dedicated to, well, being a secret cabal of terrorists.

Spectre has been parodied everywhere from Get Smart to Austin Powers to The Venture Bros, so a little buy-in is necessary to get your head around the notion being presented seriously, but the presence of Waltz and Guardians Of The Galaxy MVP David Bautista as Mr Hinx, a silent killing machine who likes to put people’s eyes out with his thumbs, lends gravitas. Bautista is great here; Bond henchmen always run the risk of being camp or gimmicky as opposed to iconic, but Hinx falls on the right side of the line. Oberhauser, though…

And now we have to enter slight spoiler territory. I’ll give you a heads up when they’re over.

Oberhauser, in case you haven’t figured it out, is classic Bond villain Erst Stavro Blofeld. Which is fine. It’s a little Khan in Star Trek Into Darkness, but it’s fine. I personally think the Mystery Box approach to marketing, where any hint of plot detail is considered a spoiler and benign elements are kept under tighter security than the Enigma machine, is pants-on-head ludicrous, but I think Eon Productions has handled this reasonably well, in that a) they didn’t flat out lie to anyone, and b) if you know your Bond, the second you learned the title of this installment was Spectre, you immediately suspected that Blofeld would be cropping up, and the casting of Waltz made it a certainty.

However, we’re told here that Blofeld is actually Bond’s foster brother, Oberhauser, long thought dead, and he’s been manipulating events in Bond’s life since Casino Royale as revenge for his father treating Bond better than him. Le Chiffre and the death of Vesper Lynd? Blofeld. the whole Quantum thing?** Blofeld. Raoul Silva’s campaign against Judi Dench’s M? Blofeld, although Christ knows how that makes sense.

It’s really ham-fisted, and it shrinks the 007 universe, making it seem small and insular, even more so than the small and insular intelligence community it portrays. Bond is supposed to be the guy who gets the job done, not the guy the job is about. Is it reflective of our culture that our stories these days seem to be loathe to present protagonists or even antagonists who are motivated by things beyond their own rivalries and emotional scorecards? That’s a large topic for another time perhaps.

So this Blofeld pill is a little difficult to swallow, but it’s worth it. Waltz actually makes for a less than impressive villain here, but since this is kind of Blofeld Begins, they’re laying the groundwork for future appearances and assembling the iconography of the character. This Blofeld appearance may not tick every box, but it promises good things in the future.

Spectre is by far the Bondiest of the Craig Bonds, by which I mean it feels most like the sort of aggregate tone of its predecessors. Craig’s run has been marked by a sometimes unbearable desperate need to be taken seriously, dammit, which hit its nadir with Skyfall, a flick that might very well be a good action movie, but is not a good Bond film. Bond is pretty much impossible to be taken seriously – which is not to say he should be treated campily. Bond is a white male post-war power fantasy, and the worst thing that can be done with the property is to make it behave like it’s ashamed of that essential, if uncomfortable, truth. Bond needs to be fun – or at least, fun for straight white guys, which is itself a problematic proposition worth talking about another time.

And Spectre, at last, is fun – or at least, Craig’s Bond looks like he’s enjoying himself, and why not? He beds beautiful women (Monica Bellucci and Leya Seydoux), kills bad guys, visits exotic locales and blows them up, and ultimately saves the world. It’s a simple formula and a workable one. Gone is the sturm und drang of Skyfall: Mr Kiss Kiss Bang Bang is back. Indeed, in the third act when Oberhauser tries to taunt Bond with the lives on his conscience, Bond seems unperturbed; the sins of the past are Oberhauser’s hang up, not his.

The essential tension in any Bond film since, say, Goldeneye is between the need to keep the property relevant for contemporary audiences and the need to retain the familiar elements that have drawn such a large and loyal extant fanbase. Spectre pretty much nails it (although I could do without the defensive “Bond proves he hasn’t been outdated” trope that has also been going since Goldeneye). As a self-reflexive pastiche of what makes an enjoyable 007 romp it’s pretty much the business. Anyone expecting something truly innovative and provocative is going to be sorely disappointed but, then again, that’s not what Bond has ever been about.

*I honestly hope that makes sense, because I’m not in the mood to explain every facet of the Bond oeuvre and universe.

**Quite funny, in that the name Quantum was only used because a copyright dispute kept Spectre off the table for the last three movies.