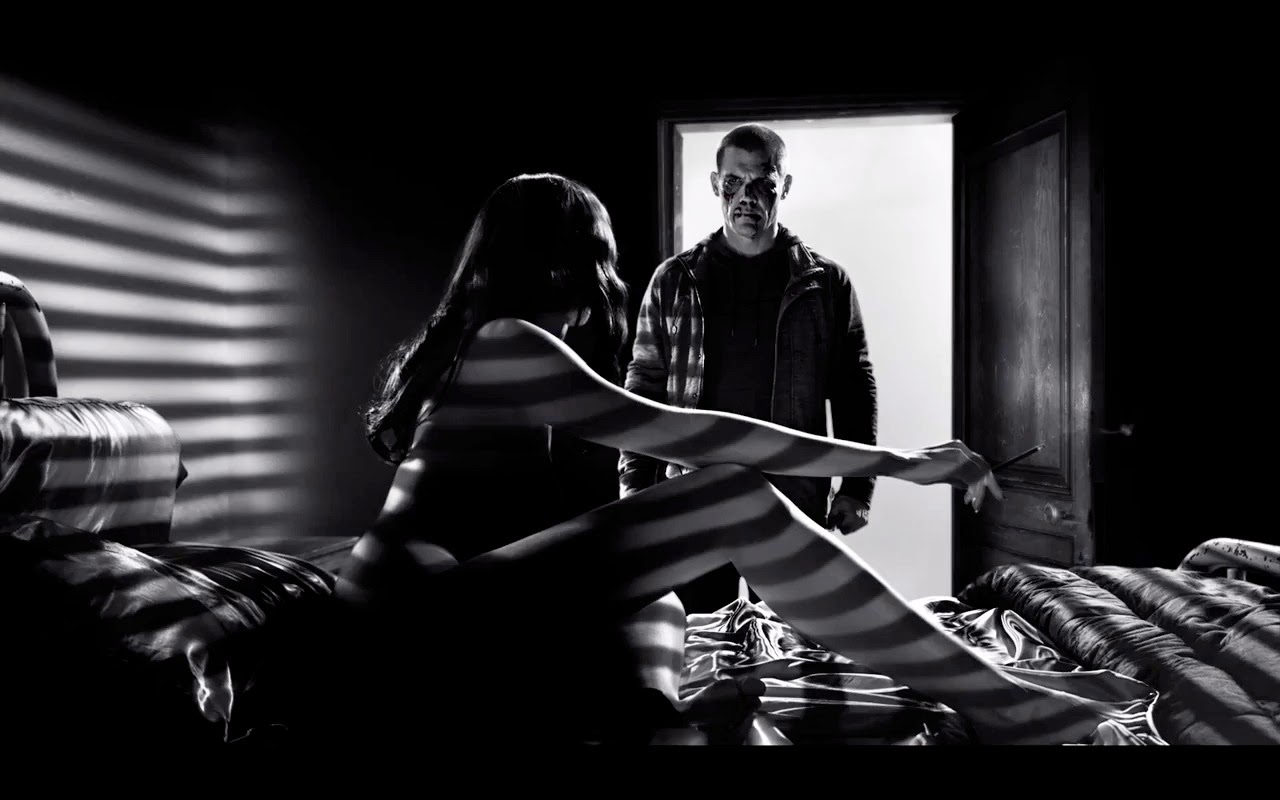 Directed by Robert Rodriguez, Frank Miller
Starring Mickey Rourke, Jessica Alba, Josh Brolin, Joseph Gordon-Levitt, Rosario Dawson, Bruce Willis
When all you have is Mike Hammer, you see every problem as a frail.
The anthology format of 2005’s Sin City – a collaboration between rebel without a crew Robert Rodriguez and noir comic specialist Frank Miller, based on the latter’s intermittent Dark Horse crime series – made it a good fit for sequelisation. Miller’s (Ba)Sin City was repeatedly referred to as a place where you could “walk down the right back alley and… find anything” and that notion, couple with existence of several as-yet-unadapted comics made the narrative soil seem fertile. And yet here we are, a decade later, after numerous false starts and cast turnovers (Johnny Depp and Angelina Jolie were both attached at different points) and the result is, well, pretty terrible.
Once again we have a portmanteau piece, with two episodes drawn from extant Miller works (Just Another Saturday Night, a Marv solo adventure, and the title story, which ramps the standard noir notions about masculinity in crisis up to a feverish screech of misogyny) and two original parts: The Long Bad Night, which sees Joseph Gordon-Levitt’s cocksure gambler take a run at the loathsome and corrupt Senator Roark (the always enjoyable Powers Boothe) and Nancy’s Last Dance, where Jessica Alba’s nevernude stripper also comes gunning for Roark, who was responsible for the death of her hero, Hartigan (Bruce Willis) the last time around.
It’s tempting to say that the new stories drag down the average here. They’re both not up to much, drawing on the same genre clichés that has always been Sin City’s stock in trade, but deploying them with a kind of dreadful, po-faced sincerity instead of the cocky, knowing playfulness of the first film. Nancy’s Last Ride is particularly terrible, a leaden, muddled revenge melodrama that lurches from laughable to offensive to laughably offensive before juddering to a halt without the slightest hint of dramatic payoff or catharsis. It even shatters the already loose continuity of the property by having Mickey Rourke’s urban barbarian Marv apparently back from the dead to help out Alba’s retribution-bent hellcat.
But the truth is that A Dame To Kill For is bad across the board. It’s a decidedly lackluster affair, privileging fidelity to Miller’s comics over effective cinematic storytelling and drowning in its own overwrought voiceover. You could argue that these conceits were already part of the package, having been used reasonably effectively in the 2005 effort but, to paraphrase Sam Peckinpah, it’s how you blow up a bridge that counts. This time around, the fuze fizzles.
This is easily Robert Rodriguez’s worst film. Worse than Machete Kills, worse even than Shark Boy And Lava Girl, and it’s a damn shame that his CV is littered with so many turkeys. His first film, El Mariachi, is still the stuff of legend – an ultra-low-budget action flick that let the Texan film student crack the big time As a young filmmaker, Rodriguez was a revelation and an inspiration, his DIY ethos and open willingness to share his knowledge making the world of filmmaking seem accessible to anyone with the vision and the cojones to take their shot. Now, two decades later, his schtick has grown stale, and what once seemed audacious and energized now seems lazy and cheap. A Dame To Kill For seems like the work of a man no longer engaged with his art.
It could be we’re holding both the film and the filmmaker to a higher standard than they deserve. After all, both the property and Rodriguez himself revel in their pulp roots. That’s just making excuses, though. By any lights, A Dame To Kill For is lazy, ugly, crude and, worst of all, boring. Just think – if Rodriguez and Miller had walked down the right back alley, they’d have found a better movie.
TRAVIS JOHNSON