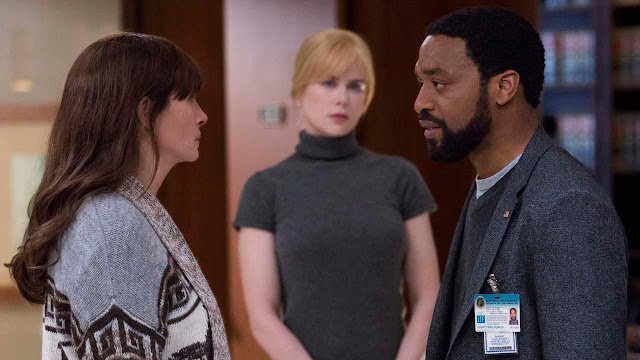 Reworking the 2009 Argentinian film The Secret In Their Eyes, which scooped the Best Foreign Language Picture Oscar that year, writer and director Billy Ray gives us a somber adult thriller that strives to be mature and intelligent, but is frequently as dull as dishwater.

It’s a frustrating shame. Having given us Shattered Glass and Breach, Ray knows his way around this kind of thing, and the source material is a haunting meditation on memory, regret and obsession. The American version differs greatly from the Argentinean in terms of specific details and, obviously, setting, but it retains the same thematic elements. And yet it lacks the impact, emotional and visceral, of its forebear.

Chiwetel Ejiofor is Ray Kasten, a former federal agent now working in private security who returns to his old colleague Claire Sloan (Nicole Kidman), now Deputy District Attorney, to drop a bombshell on her: after years of investigation in his own time, he believes he has tracked down the man who murdered the daughter of their friend and workmate, Jess Cobb (Julia Roberts). The question is, do they reopen the case and attempt to bring the killer to justice, or do they go off the books and deliver him up to a more final punishment?

Ray frames this against the War On Terror, splitting the action between two time periods: now and some 13 years ago, not too long after 9/11. When Cobb’s daughter is found dead near a mosque known to be a hotbed of radical rhetoric, the most likely suspect is Marzin (Joe Cole), who happens to be an informant used by fellow agent Reg Siefert (Michael Kelly). Politically savvy Homeland honcho Morales (Alfred Molina) avows that he will do anything to prevent another 9/11, but promises he will prosecute Marzin if he is presented with compelling evidence.

Of course, in 2015 Marzin is in the wind and Kasten is opening old wounds for all concerned, so we know nothing went according to plan. Ray often takes what Tarantino called an “answers first” approach, presenting us with a scenario and then backfilling in the explanation via flashback. That’s how we come to understand the unrequited love that exists between Kasten and Sloan, and the enmity between Kasten and Siefert. It’s a nice conceit, but somehow fails to engage. Ray plays things deliberately low key for the most part; these are smart professional people who carry their own pain as well as they can, so it makes sense up to a point, but after a while you’re praying for someone, anyone, to take some kind of deliberate, self-serving action. All the sublimated emotions and guarded dialogue is a drag after a while.

That’s the script’s fault, not the cast’s. They’re all great, Roberts in particular, but even the best acting work can be hobbled by sloppy writing, and Ray’s script is so very, very sloppy. Secret In Their Eyes has an almost desperate need to be serious, dammit, and apparently that means abrogating its responsibility to be interesting. It plods along, somber and self-flagellating, luxuriating in its characters’ pain and regret. Now, that’s a fair creative choice, and potentially an effective one – take a look at Denis Villeneuve’s Prisoners – but Secret In Their Eyes is also littered with pulpy elements that sit at odds with it’s dour tone, including a preposterous climax that sits alongside Thomas Harris at his most lurid.

Secret In Their Eyes is not a terrible film but it is definitely an annoying one, and mainly because it’s so easy to see the shape of a better film under its surface. Hunt down the Argentinean original instead.