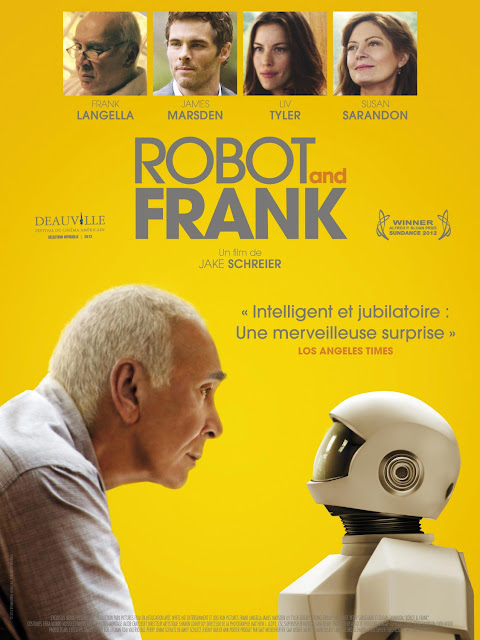 The First Law
Directed by Jake Schreier
Starring Frank Langella, Peter Sarsgaard, Susan Sarandon, James Marsden, Liv Tyler, Jeremy Sisto
Given the preponderance of giant robots and thin scripts in the majority of sci-fi movies, it’s sometimes easy to forget that the genre is capable of depth and nuance. Happily, this indie effort from debut feature director Jake Schreier serves as a useful corrective.
It’s the near future, and divorced retiree Frank (Frank Langella) is not dealing well with it. His old haunts are long gone; his place of refuge, the local library run by Jennifer (Susan Sarandon), is switching to an all-digital mode that replicates the “library experience;” and his memory is starting to slip. To help with the latter, his adult son, Hunter (James Marsden), gets him a robot helper (voiced by Peter Sarsgaard).
At first, the fiercely independent Frank resists the android’s intrusion into his life, bucking against the machine’s efforts to put him on a healthy diet and structure his day by encouraging him to plant a garden. Things change when, after a spot of accidental shoplifting on the part of the droid, Frank learns his new helper isn’t bound by the law, but only by his programming to improve his owner’s wellbeing. As it turns out, Frank is a former cat burglar, and he duly enlists Robot (the ornery old guy never bothers to give it a name) to help him plan a series of thefts – finally, a lifestyle activity the wily old scoundrel can get into.
Robot and Frank could easily have been the kind of “old guy’s still got it” film that the likes of Eastwood and Willis have been specialising in of late, but what lifts it above that ilk is Schreier’s lightness of touch, and a captivating and layered performance by Langella. The film never hides the fact that Frank is starting to slide into dementia, and the new zest he finds when returning to his old thieving ways is as heartening as the inevitable decline is saddening.
For all that, it’s also a very funny film, with the cantankerous Frank cracking wise with the oblivious, eternally polite Robot. A relationship of real depth and pathos builds between the two, and it’s all the more touching for the fact that Robot has no self-awareness. He’s not an artificial intelligence, only an incredibly sophisticated machine, which makes Frank’s confession to his anti-robot daughter, Madison (Liv Tyler), that Robot is his friend particularly poignant. Frank’s mental decline and the emotional and physical distance of his well-meaning but self-absorbed children have left him almost completely socially isolated; is it any wonder he comes to view Robot as not just a computer, but a companion?
Robot & Frank is quite a loaded package: a spry caper film, a gentle comedy, an interesting extrapolation of current technology trends, and a meditation on the way we care – or fail to care – for the elderly. While there are a few stumbles along the way, it’s a thoughtful, warm, and thoroughly human film.