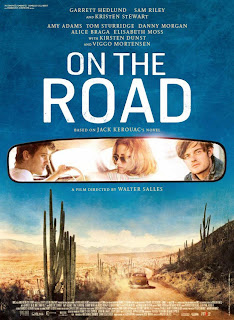 The Proud Highway
Directed by Walter Salles
Starring Sam Riley, Garrett Hedlund, Kristin Stewart, Kirsten Dunst, Viggo Mortensen, Amy Adams
After more than thirty years of development and numerous aborted attempts – Joel Schumacher was once attached, a thought to chill the blood – Jack Kerouac’s hugely influential novel finally gets transcribed to the big screen, under the auspices of director Walter Salles (The Motorcycle Diaries) and producer Francis Ford Coppola (come on, now…).
Sam Riley plays author avatar Sal Paradise, an aspiring writer who comes into the orbit of the dangerously charismatic and cheerfully irresponsible Dean Moriarty (Garrett Hedlund). Together, the two travel back and forth across the landscape of late-’40s America, frequently drunk, often high, and generally in some sort of trouble, in search of a kind of ecstatic philosophical apotheosis.
Given the book’s stature – it’s a key text of the Beat Generation and a major cultural touchstone, inspiring countless homages, appropriations, and imitations – there’s little wonder that it took so long to get to the screen, but Salles and screenwriter Jose Rivera do an admirable job of massaging the source material’s loose and unwieldy form into something that, more or less, works as a piece of cinema. The film evokes the mysticism and romance of the Beats and the tidal draw of the road, while simultaneously highlighting the perils and compromises that such a carefree existence brings. Chiefly, this is done by beefing up the female roles, such as Kristen Stewart’s Marylou and Kirsten Dunst’s Camille, with Salles taking the time to show how the behaviour of the freedom-loving but essentially selfish Moriarty impacts their lives.
That Moriarty still remains a likable figure is down to Hedlund’s performance. It’s axiomatic that the current crop of young performers lack talent, but perhaps what they really lack is worthwhile roles. While his turns in Eragon and Tron: Legacydid him no favours, Hedlund sinks his teeth into the iconic role of Moriarty, delivering a standout performance. The rest of the young cast deliver turns that are equally astute, if not so showy; Riley makes for a sensitive and empathetic point of view character, and even the much-maligned Stewart brings warmth and a kind of ingénue sexuality to her role. The more accomplished supporting cast also fare well; Terence Howard and Steve Buscemi crop up in small cameos, and every moment that Viggo Mortensen is onscreen as William S. Burroughs stand-in Old Bull Lee is a delight.
Purists might find their sensibilities offended by some of the liberties taken, but a direct translation was never going to work. Salles and his team have managed to preserve – and occasionally, arguably heighten – the tone and the theme’s of Kerouac’s novel. While the result may not match the viewer’s own personal mental image of the source material, Salles’s version is still a worthy and thoughtful adaptation of one of the most important books of the twentieth century.
(First published in X-Press Issue 1337 26/09/2012)
Trav Note:  Having watched the film twice now, I’ve kind of shifted my position somewhat, having come to apprehend the strong conservative subtext of the film. That understanding is not reflected in the above review, which was written in between the two viewings. I’ll try to bang out a think piece in the next few days about shifting perspectives, personal bias, and all that jazz)