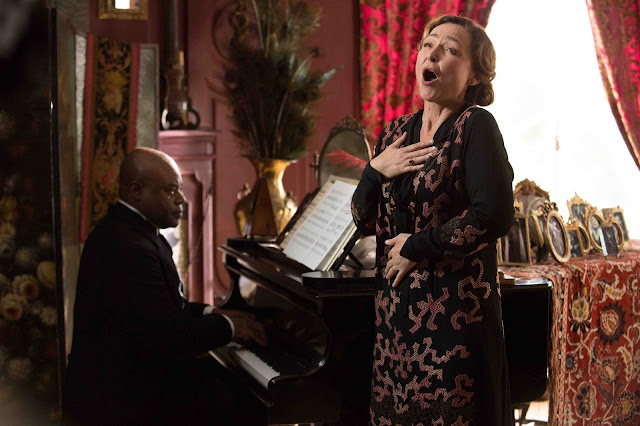 Set in post-World War One France, Marguerite centres on the titular ageing socialite (Catherine Frot), a music lover who lives to give singing recitals to her upper-crust peers. The only problem is that she is a terrible singer, enthusiastic but utterly talentless – a fact no one around her can bring themselves to clue her in on. Things begin to move come to a head when she decides to give her first major public performance in Paris, an act that will almost certainly being her crashing headfirst into the truth about her artistic abilities. But how will such a thing affect her?

Director and co-writer Xavier Giannoli (his last film, Superstar, played the festivals here in 2012) handles the material deftly. Marguerite could have been a farce, a comedy of manners, a scrappy underdog fable, even a tragedy about delusion and loneliness. Instead it’s all these things, the tones and themes blending often within the same scenes to produce something very specific and unique. The result is a far more complex and nuanced film than the subject matter might suggest. Indeed, it’ll be interesting when the Meryl-Streep-starring Florence Foster Jenkins, which draws on the same historical figures for inspiration, arrives to show us a different interpretation; it’s hard to imagine it doing a better job.

A lot of that is down to the truly impressive work by star Catherine Frot (Haute Cuisine). Marguerite is something of a ludicrous, pitiful figure, with her costumes and photographs, her props and pretensions which distract her from her lonely life. Frot, however, never lets us see her as a caricature; Marguerite is deluded, yes, but she is also warm, friendly, passionate, generous and strangely humble – she considers herself an artist, not a diva, and that quality is what makes her situation so tragic. Frot, a veteran figure in French cinema, has had awards thrown at her for this turn, and it’s easy top see why: it’s arguably a career best performance.

She’s well supported by a great ensemble playing the various characters who fall into her strange, atonal orbit, chief among them Andre Marcon as her philandering husband, Georges, and Denis Mpunga as her devoted butler, Madelbos. The two are ostensibly opposites, with Georges embarrassed by his wife’s heedless warbling (he fakes car breakdowns to avoid her recitals, a practice that breaks her heart) while Madelbos strives tirelessly to manufacture the ephemera of her non-existent fame and esteem, including ordering bouquets from non-existent admirers and carefully censoring negative reviews. Yet Georges clearly cares for Marguerite and worries that she will suffer unduly if her illusions are shattered, while Madelbos admits – or at least asserts – that his loyalty is self-serving, and he wants to cash in on her infamy once she is exposed.

Also in the mix are Michael Fau as a fallen opera star roped in as Marguerite’s voice coach, Sylvain Dieuaide and Aubert Fenoy as a couple of chancing journalists and artists who get caught up in her world, and Christa Theret as a talented but impoverished young singer, whom Dieuaide’s character has designs on.

Boiled down to the essentials, Marguerite is about the inalienable right to make art, even terrible art – a theme which is made overt in a scene where Marguerite is dressed down for performing La Marseillaise in a dodgy cabaret review. In unpacking this notion, Giannoli and his team have, in fact, made great art; Marguerite is hilarious, affecting and provocative, and you’d need a pretty serious tin ear not to be moved by the song it’s singing.