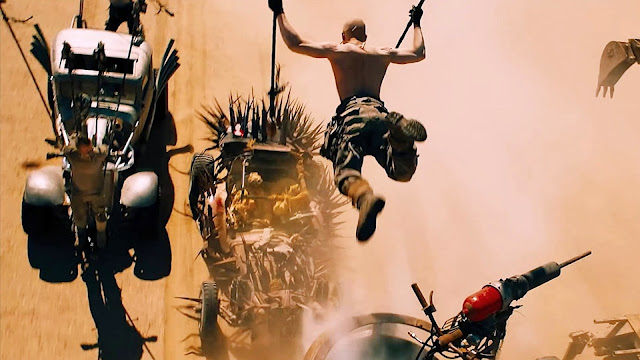 When is a sequel not a sequel? When it’s a remix.

That might be the best way to think of Mad Max: Fury Road, director George Miller’s much-delayed fourth entry in the iconic post-apocalyptic action franchise. At the very least it’ll save a lot of headaches for the continuity-conscious, who will do themselves a mischief if they expend too much effort trying to make the new film jibe with the older installments. There’s been a concerted effort by the Mad Max publicity machine to frame Miller as a “maestro,” and that musical analogy is a good fit; like a composer, he takes pre-existing notes, riffs, motifs and themes, combines them with new elements and produces something new and exciting that also honours what has passed. Fury Road lifts pieces from all three prior films and repurposes them, shifting some elements and refining others, giving us not a belated sequel but a new Max for a new time.

We’re dropped into the action almost immediately after a brief (and largely unnecessary) bit of voice-over narration by Max (Tom Hardy taking the reins from Mel Gibson) when our eponymous wasteland wanderer is captured by a raiding party in service to the warlord Immortan Joe (Hugh Keays-Byrne, who also played the villainous Toecutter in the first flick). It isn’t long before he’s caught up in an attempt by one of Joe’s officers, Imperator Furiosa (Charlize Theron, fierce and show-stealing) to free Joe’s five “wives” from sexual slavery. Reluctantly, Max is press-ganged into helping the women flee across the desert in a “war rig” – a tractor-trailer customised for battle – while Joe and his “War Boys” – a kind of death-fixated warrior cult – give chase.

That’s about it for plot – all else is velocity. The film is essentially one long chase/fight sequence, broken down into expertly constructed and executed vignettes. At 70, Miller has lost none of his action chops and, indeed, seems to have only grown in competence: this is a film that is both assured and kinetic, using precisely chosen shots and editing to deliver a profound, intoxicating sense of force, motion and violence.

In short, it’s a flat-out masterpiece of action cinema – an instant classic of kinetic filmmaking. Miller and his cinematographer, John Seale – who came out of retirement to frame this mayhem – balance motion, speed and clarity, building propulsive battle sequences that are only improved by giving the audience a clear understanding of who is where and doing what in any given moment. Action fans are going to find themselves in paroxysms of joy.

All this violence takes place in a wonderfully detailed and textured world where iconography stands in place of detailed characterisation and telling details do the work of reams of dialogue (in point of fact, the dialogue is the film’s biggest liability – the less that is said, the better the movie is). The Mad Max films popularised the notion of the post-apocalyptic scavenger society, all jury-rigged gear, chimeric, kit-bashed vehicles and fetishistic punk fashions, and we get more of the same here, only cranked up to eleven. Fury Road has a grander sense of scale than the last three films combined, not only in terms of size, such as the desolate grandeur of Immortan Joe’s mesa fortress or the sweeping vistas the bizarre vehicles charge across,but the sheer, insane extremes of character, culture and costuming we’re treated to. The whole film is a parade of freaks and grotesqueries- and I mean that in the best possible way, with minimal lip service being paid to such tiresome ideals as “realism” and “plausibility.” the whole thing feels like an overblown, anarchic, hyper-violent comic strip – no doubt owing a good chunk of that sensibility  to co-writer Brendan McCarthy, himself a veteran of cult British sci-fi comic 2000 AD.

For some viewers the most disturbing freak in the sideshow might be Max himself, with Hardy deciding to take the “Mad” in his moniker to mean “crazy” more than “angry.” Hardy’s Max is haunted by his past failure to save people who relied on him and poorly socialised to boot – you get the sense he’s been out there for a long time. His performance is much more vulnerable and eccentric than old fans may like – don’t expect a replay of Gibson’s hyper-competent survivalist.

The character who most fits that mould, in fact, is Furiosa – an instantly iconic figure with her clunky robot arm and clear-eyed death stare. In many ways Furiosa is the protagonist of the film, with Max simply caught up in the wake of the reformed marauder’s quest for redemption; indeed, some of the MRA crowd are already getting worked up over the character’s prominence, agency and generally badassedness, but fuck those guys right in the ear – what do they know?

What I know, however, is that Fury Road is a great, great film – a bold, bombastic slice of frenetic, kinetic madness whose simple chase structure belies a wealth of rich subtext and mythic resonance (something I haven’t even touched on here – there are three essays I want to write about this damn movie already). We’re so used to seeing old franchises reheated  for purely financial reasons – hi, Terminator! – that it’s almost hard to believe we just got gifted with something this good – a re-imagining of a venerated property that manages to elevate not only its own material but the very genre it’s working in.