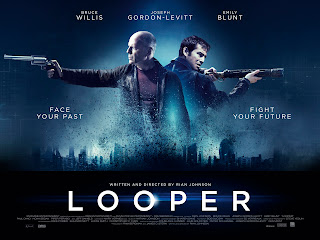 Time Bandits
Directed by Rian Johnson
Starring Joseph Gordon-Levitt, Bruce Willis, Emily Blunt, Noah Segan, Jeff Daniels
Following on from his audacious debut, Brick, and the dapper and deceptive caper flick, The Brothers Bloom, director Rian Johnson paints on a much larger canvas with this thoughtful time travel thriller.
Joe (Joseph Gordon-Levitt) is a “looper” – a specialised assassin who disposes of victims sent back in time by a crime ring in the future. Every looper knows that, at some point, they have to “close their loop” – kill their future self. On completion of that final assignment, they get a huge golden parachute to carry them into retirement, until they’re eventually sent back to be executed. Of course, things go awry when the older version of Joe (Bruce Willis) is sent back, and Young Joe must hunt down Old Joe while evading the forces of his employer, Abe (Jeff Daniels).
Thinking about the logistics of the film’s take on time travel will only send the viewer cross-eyed, and though they have some fun with the implications – at one point an escaped target watches his body parts disappear as a mob doctor vivisects his younger self – Johnson has his characters explicitly tell the viewer not to get too bent out of shape trying to decipher the temporal physics. He’s much more interested in examining the emotional implications of the setup.
Much will be made of Gordon-Levitt’s remarkable impersonation of Willis – a performance bolstered by subtle but effective prosthetic makeup – but what really impresses is the way that both actors manage to make the character recognizably the same man, but at different stages of his life. While Gordon-Levitt’s Joe is cold, detached, and almost nihilistic, Willis’ version is burdened with both wisdom and regret, having lived long enough to understand the repercussions of the choices that Young Joe is still in the process of making.
Looper is also that rarest of beasts, a sci-fi film that doesn’t look like a knock off of Blade Runner. Being set in Kansas City and its surrounding environs, much of the action takes place in rural fields and remote farmhouses. It’s depiction of an economically devastated America owes a lot to Depression-era fare like The Grapes of Wrath, and the latter half, where Young Joe has to help protect Sara, a young farm owner (Emily Blunt) and her child-prodigy son, Cid (Pierce Gagnon), resembles nothing so much as a fresh riff on the classic Western, Shane.
All up, Looper is a smart, taut, thoughtful thriller that uses its sci-fi set-up as a framework to meditate on notions of destiny and choice, while never disappearing up its own subtext. Although Johnson’s influences are fairly obvious – in addition to the above, there are elements of The Terminator here, as well as a dash of Willis’s earlier Twelve Monkeys – he manages to combine the old ingredients in a new way. Anyone who likes their action grounded in intelligent plotting and robust characterization is going to love this one.
(First published in X-Press Issue 1338 02/10/2012)