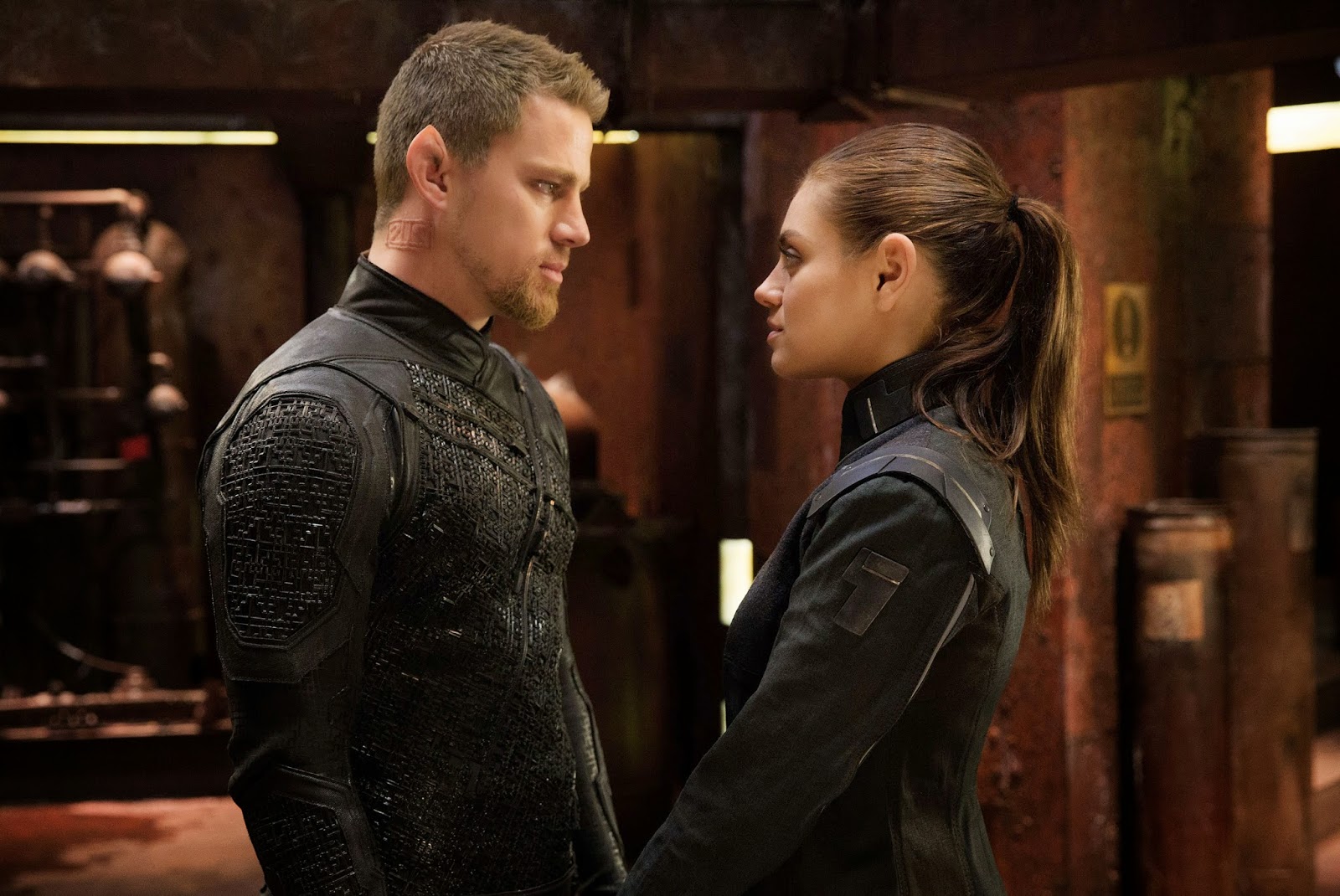 Directed by Lana and Andy Wachowski
Starring Mila Kunis, Channing Tatum, Eddie Redmayne, Sean Bean
If we graded just for effort and enthusiasm, then this latest offering from the team who are still best known for the groundbreaking Matrix Trilogy would get straight A’s: it’s a big, ambitious, universe-spanning adventure steeped in gorgeous production design and possessed of a truly impressive sense of scale. Sadly, we also have to consider execution, which is… well, it certainly looks very nice.
Riffing on Dune, Flash Gordon, and every big, dumb, sprawling space epic in between, Jupiter Ascending sees Mila Kunis’ titular downtrodden Russian-American cleaning lady, Jupiter Jones, get caught up in the power struggles of a corrupt galactic family when she turns out to be genetically identical to their deceased matriarch. With only a faithful human/wolf hybrid (Channing Tatum) to protect her, Jupiter must navigate a strange and exotic universe where planets like Earth are merely resources to be used by the ultra-privileged to extend their lifespans for millennia.
That all sounds pretty good, and Jupiter Ascending is packed with the sort of ephemera that makes space opera so appealing as a genre: big ideas; strange, alien characters and locations; weird technology and weapons; plus the sensation that we’re seeing just a small part of a larger, more complex and fascinating world.
Unfortunately, the Wachowskis seem to have also doubled down on the more problematic elements of the genre as well: episodic, disconnected storytelling; leaden, exposition-heavy dialogue and thin characterisation. Worse, there’s the feeling that a lot of the cast are faintly embarrassed by what they’ve gotten involved with, a total buzzkill in a film where the villain’s chief dragon is literally a dragon, Sean Bean plays a guy who’s half-bee, and the proceedings stop dead to do an extended homage Terry Gilliam’s Brazil. Only Eddie Redmayne as the moustache-twirling villain, Balem Abrasax, seems to have the faintest idea of how campy the film is, and pitches his performance accordingly.
Indeed, an appreciation of camp is key here, and if you keep that in mind its hard to dislike Jupiter Ascending no matter how glaring its faults. It’s just that it’s far more Barbarella than Star Wars, so audiences expecting a film that takes itself seriously are in for disappointment. It also makes the classic Wachowski error of forefronting its subtext over its actual narrative, which means that the fairly obvious one per center parallels get sledgehammered home while Jupiter, our nominal protagonist, is left almost bereft of agency for the entire run of the film – things happen to her and around her, not because of her.
That’s the film’s most damning mistake – an audience will forgive almost any contrivance or silliness of they have characters to care about. If Jupiter Jones and her entourage of ambulatory genetic mixtapes were people we could empathise with, then perhaps Jupiter Ascending could be viewed as a flawed success. As it stands, it’s an ambitious failure.
TRAVIS JOHNSON