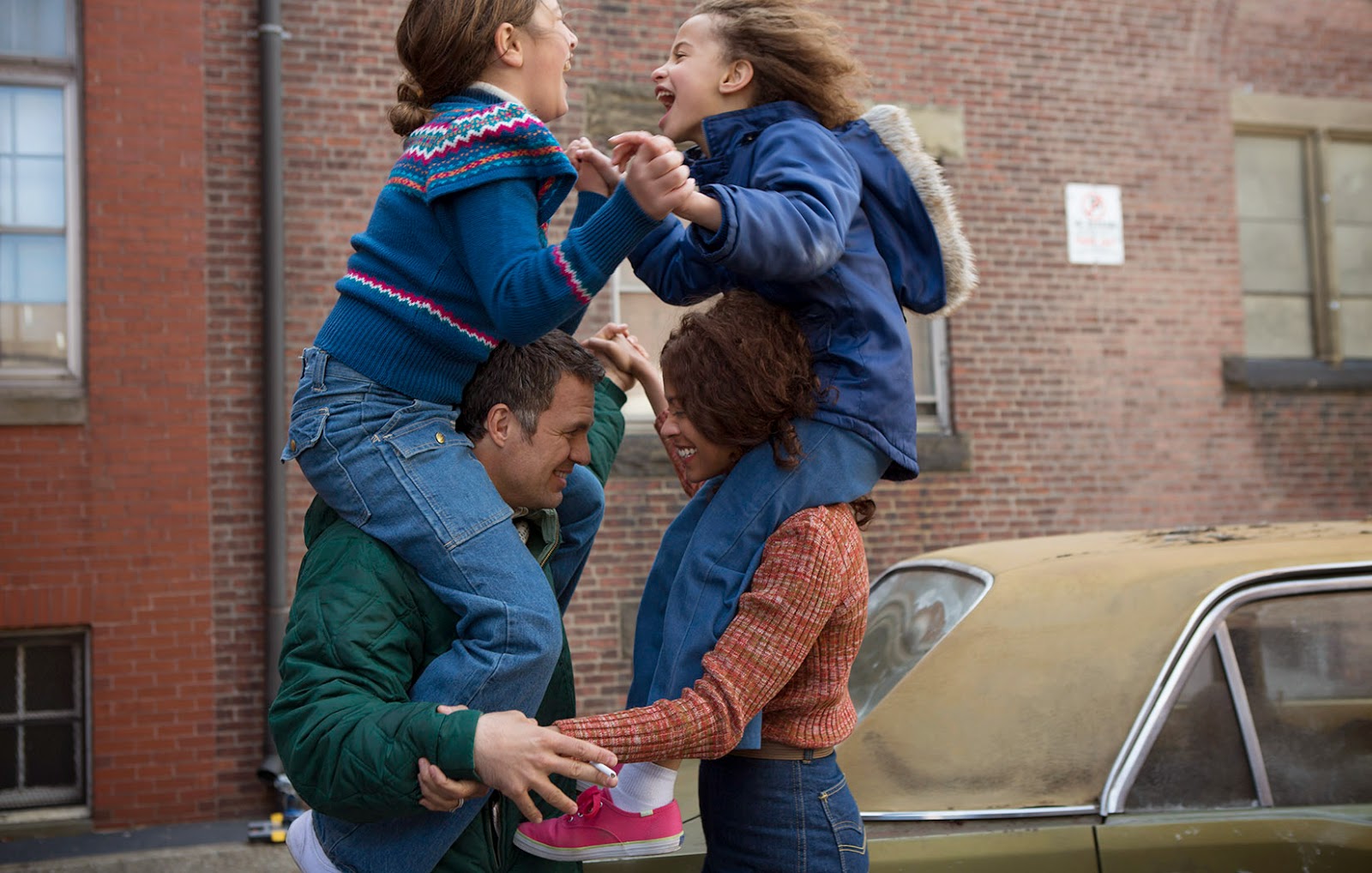 Directed by Maya Forbes
Starring Mark Ruffalo, Zoe Saldana, Imogene Wolodarsky, Ashley Aufderheide
In her directorial debut, Maya Forbes lightly fictionalises her family history and her relationship with her father to create an affectionate portrayal of high-functioning dysfunction.
Forbes’ proxy in the film is young Amelia Stuart, played by Forbes’ own daughter, Imogene Wolodarsky.
Through voiceover she relates how her parents, Cam (Mark Ruffalo) and Maggie (Zoe Saldana) met and fell in love at the tail end of the ‘60s. Cam had been diagnosed manic-depressive but, as the precocious Amelia explains, everyone was having emotional breakdowns at the time and it didn’t seem like such a big deal.
Cut to a decade later and it is a big deal, with Maggie fleeing the family’s country home with Amelia and her younger sister, Faith (Ashley Aufderheide) in tow in the wake of a particularly aggressive manic phase. While Cam is institutionalized, Maggie holds down a dead-end job to support the girls until she is offered a position in a New York business school. Seeing the opportunity as a way to secure her children’s future, Maggie makes a deal with Cam: she will move to New York to study full time for 18 months, leaving him to care for their kids. The theory is that the structure and responsibility will help Cam master his condition, but can he handle it?
Infinitely Polar Bearis shaggy kind of film, shapeless and episodic, but it’s buoyed by strong performances and Forbes’ astute eye for both character and period detail. It’s a portrait more than a story, really, but it’s a portrait of fun and interesting people, and so the film never feels like its spinning its wheels, even as incident follows incident with no real sense of plot progression.
Ruffalo gets the meatiest role here as Cam, a theatrical, flamboyant, bear of a man who loves life with a zest and ferocity that others can find off-putting. A big, bold bohemian, he gets lost in a million and one little projects and experiments, dropping one to start another and leaving the family’s cramped apartment strewn with machine parts and tools. It’s the type of role that invites histrionics, but Ruffalo cannily steers the role back towards the centre line, investing Cam with a very human vulnerability that renders him a character rather than a caricature.
Saldana gets the less showy role as the more practical-minded Maggie, but is no less impressive in it. Her love for Cam is a palpable thing, even as she makes hard choices which mean the two of them will almost certainly never be together again as husband and wife (something Cam makes no bones about pushing for). If anything, Maggie is our real point of view character, as we share her key concern: is Cam capable of straightening up, or is the whole arrangement going to self-destruct? For all that, their relationship feels tactile and real, and you get a concrete sense of history and familiarity when they share the screen.
Perhaps the most interesting aspect of the film is its deft portrayal of the subject of mental illness. Cam’s bipolar disorder is not treated as an excuse for freewheeling, over the top grandstanding (although there are times when the picture skews perilously close), nor as an othering burden to be negotiated or overcome, but as an aspect of his character with both positive and negative qualities. It’s a genuinely refreshing approach, and it’s hard to recall a film that takes a more even handed and matter of fact view.
Indeed, Infinitely Polar Bear takes in a number of issues without becoming an “issues movie,” touching on notions of race (Amelia is unsure whether she counts as black or not), class (Cam’s family are old money Bostonians while he lives in poverty) and gender (Maggie struggles to make potential employers see past her role as a mother) without becoming mired in them; they colour the action of the story without tying it down. It’s all just narrative scenery as the really big question plays out: can this oddball family survive intact, and what shape will it be in when the credits roll?
Warm, welcoming and human, Infinitely Polar Bear is a love letter to the tenacity of familial bonds.
TRAVIS JOHNSON