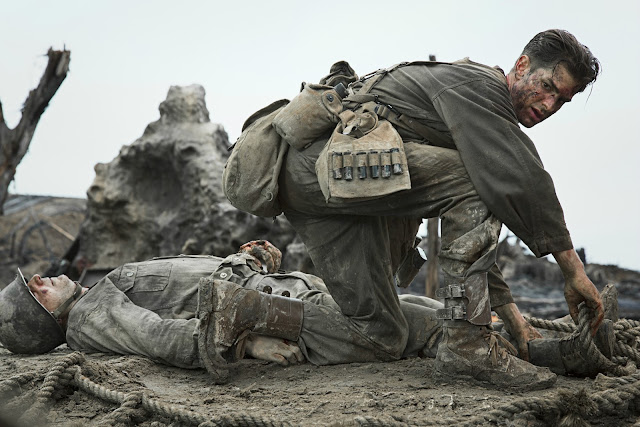 Mel Gibson’s return to big-budget filmmaking is a movie about faith, and that is going to be a sticking point for some audiences. But it was undoubtedly his strong religious convictions that motivated conscientious objector and eventual Medal of Honour recipient  Desmond T. Doss (Andrew Garfield) to save 75 of his comrades during the pitched and bloody Battle of Okinawa, and moreover to do it without carrying a weapon.

It takes us a while to get there, though. Gibson likes to take his time, and he shoots in a classical style – subtract the gore and the modern film tech and this movie could have been made in the ’50s. We spend a lot of the film with Doss the civilian, Seventh Day Adventist and son of a shell-shocked and alcoholic WWI vet (Hugo Weaving) as he lives his life in rural Virginia and romances a pretty nurse (Teresa Palmer), and even more time with him in basic training as his determination to a) do his duty as a combat medic but b) not go armed while doing so smacks up against the monolithic military machine. Vince Vaughn gets to have a lot of fun here as as Doss’s drill instructor, and this is also where we meet the platoon of army archetypes who will, you just know it, come to respect Doss when he’s picking up their limbs for them and dragging them to safety.

The battle sequences, when they do arrive, are as nightmarish and visceral as you expect from Gibson, who may like to meditate on matters of faith and individual conscience but excels at depicting mass carnage, and Doss’s heroism, though conflated for the purposes of cinematic narrative (he actually won a Bronze Star for bravery in a previous battle), cannot fail to impress – there is something inescapably compelling in his simple, honest desire to help as much as he can, even if (or perhaps because) we recognise that we would probably falter under similar conditions.

Hacksaw Ridge drifts into cliche more than once, but its strengths more than outweigh its weaknesses. This is a handsome, classical, at times quite thoughtful picture, and a welcome return to the medium for Gibson.