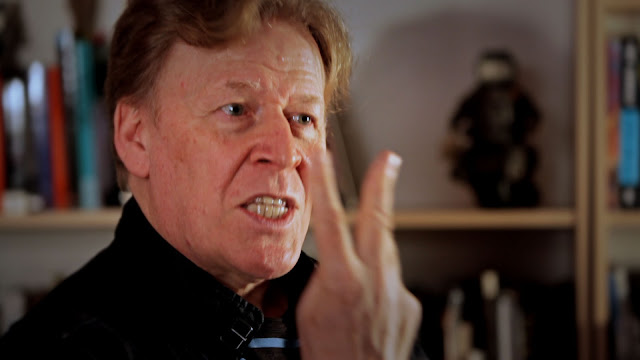 I cannot think of a more appropriate header pic than one of inaugural 2000 AD editor Pat Mills giving the two fingered salute.

The DC/Marvel dichotomy is old hat – the real cool kids are third party voters. For almost 40 years, another comics stable has been putting out some of the most challenging, anarchic and transgressive comics this side of Metal Hurlant: the British genre warhorse, 2000 AD.

Founded in 1977 off the back of the banning of its ultra-violent progenitor, Action, and a rather prescient notion that the advent of Star Wars might boost the market chances of sci fi fare, 2000 AD was a burst of anarchic punk rock energy in the stale UK comics scene. Never expected to last too long (the title is a dead giveaway), the book nevertheless went on the become Britain’s flagship comic, weathering cultural and editorial shifts and staying just enough under the mainstream radar to retain an ever-present whiff of counterculture cool.

That’s actually a key part of the comic’s appeal, and director Paul Goodwin’s documentary, Future Shock! the Story Of 2000 AD, goes a long way towards demonstrating that the spotlight is not the most pleasant of environments for 2000 AD‘s cast of fascist future cops, mutant bounty hunters, Khaos-worshiping robots and Celtic berserkers*. Both attempts at bringing flagship character Judge Dredd to the big screen were failures (although on entirely different scales), and the film also details a now thankfully almost forgotten campaign to bring the book’s other characters to film and TV.

That might be depressing, if we weren’t also treated to a veritable deluge of talking head interviews with some of the top personnel involved in creating 2000 AD – and indeed, some of the top comics creators of the past four decades. Grumpy old Alan Moore, bless him, is notable by his absence, but his daughter Leah crops up, as do Grant Morrison and Neil Gaiman, who regales not only with tales of 2000 AD‘s frankly egregious copyright policies at the time of his contributions, but also the now-never-to-be written lost chapters of Moore’s early masterwork, Halo Jones.

We also get contributions from some fantastic artists, including Dredd co-creator Carlos Ezquerra, Rogue Trooper’s Mike McMahon and Dave Gibbons, and Brian Bolland, who found wider fame when he drew Batman: The Killing Joke. But the highlight is probably the extended interviews with the “unholy trinity”, Dredd writer John Wagner, original editor and long-running writer Pat Mills, and writer Alan Grant. Now in late middle age the lot of them, they bring a refreshingly unsentimental insight into the inception, growth and day to day workings of the Galaxy’s Greatest Comic.

A bit too much time is spent on the “British Invasion” of the ’80s and early ’90s, when American publishers – DC Comics in particular, headhunted a large number of British writers who had cut their teeth in the pages of 2000 AD. It’s nice to see former Vertigo editor Karen Berger, but it smacks of insecurity, as though the approval of the American comics industry was needed to legitimise the successes of the British. Goodwin also spends a bit too much time poring over some of the poor editorial decisions that plagued the book in the mid ’90s, when we could have benefited from a closer look at how 2000 AD‘s anthology format brought us such a variety of stories. As it stands we only really get a good look at Judge Dredd (fascist cop in a future dystopia), Strontium Dog (oppressed mutant bounty hunter in future dystopia) and Halo Jones (ordinary girl in future dyst – you get it). Oh, and a fair bit of time spent on Grant Morrison and Steve Yeowell’s under-sung post-modern superhero saga, Zenith, which is welcome.

For fans of 2000 AD – and I am one – this is indispensable stuff, and clearly a labour of love. If there’s a failing, it’s that the comic is so vast and contains such multitudes that it is impossible to be comprehensive. That’s not a bad problem to have, though, and this is a thrilling look at one of the most important ongoing comics of our time.

*Indeed, the documentary itself isn’t the easiest thing to find. A friend in Melbourne, the redoubtable Cavan Gallagher, stumbled across a copy in JB Hi Fi, and I scooped one up at my local shop off the back of his intel.