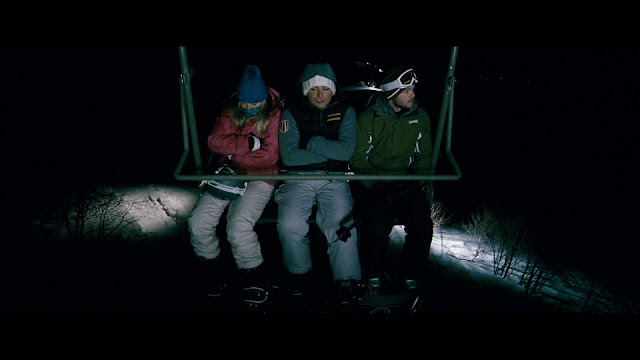 Directed by Adam Green
Starring Kevin Zegers, Shawn Ashmore, Emma Bell
Three teens are stuck on a stopped ski-lift in the dead of winter, with no hope of rescue before they succumb to the elements. It’s a nice variation on the old “locked box” formula, brought to us by Hatchet director Adam Green. By placing his protagonists in a recognizable and all too possible situation, Green has the audience on their side from the get-go, and the empathy only increases as the situation worsens and more dangerous (and, let’s face it, unbelievable) elements are introduced.
There’s a nice but not too overly complicated dynamic going on among the trio: old buddies Dan (Kevin Zegers) and Joe (Shawn Ashmore) are supposed to be having some guy time, but Dan brought along his girlfriend, Parker (Emma Bell), which puts Joe on edge a little. It’s not a big plot element, but it puts a bit more flesh on the characters’ bones, whereas they might otherwise be too thin for the audience to latch onto.
The film has been drawing a lot of comparisons to Open Water, and it’s easy to see why; there’s the small cast, the remote, isolated, setting and, of course, the pack of deadly predators waiting for the characters to slip up so they can devour them. It’s just such a nice change of pace to see wolves get out from under the whole cuddly Never Cry Wolf image they’ve been hobbled by for so long and get back to being the scary, credible threat that’s haunted our nightmares and fairy tales for so long. Perhaps it’s just a reaction to seeing too many ironic “Three Wolf Moon” tee shirts, but something about the young being torn limb from limb by a pack of these apex predators just works.
There’s nothing here that’s a game changer, and the choices as to who lives and who dies seem fairly arbitrary, but as a taut little exercise in tension, Frozen works a treat. It’s never going to be a film that breaks wide, but years from now, when horror fans are talking about under-appreciated gems, the mention of its name will bring knowing smiles to every face.
TRAVIS JOHNSON