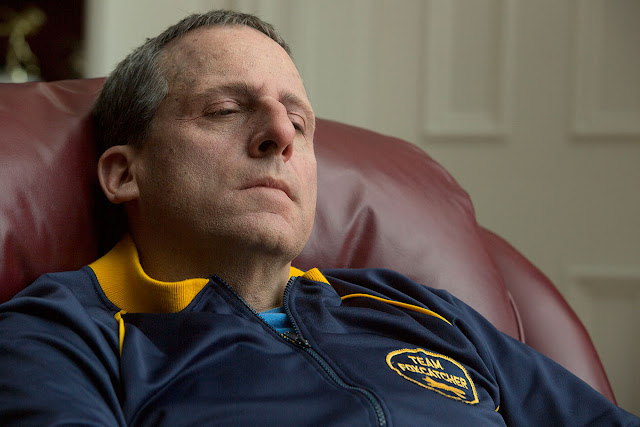 As portrayed by Steve Carrell, real life convicted murderer John du Pont gives off an eerily similar vibe to Mason Verger, one of the key villains in the literary, filmic and television versions of the Hannibal franchise. It’s not that their crimes are similar, or their mannerisms and behaviour – although both figures come for Eastern Seaboard old money – but that they are both so cossetted in wealth and privilege, so insulated from the burdens of empathy, that they do not feel entirely human. Their kinship to us is genetic, not spiritual; what lives behind their eyes is, by and large, unrecognisable.

The heir to the du Pont chemical fortune is a man of many interests: as he insists on being described in one memorable, funny and disturbing scene, he is an “…ornithologist, philatelist, philanthropist.” He is also an avid fan of athletics in general and wrestling in particular, going so far as to build a world class training facility on his family estate, Foxcatcher Farm.

du Pont wants to build an elite wrestling franchise and goes out of his way to attract top coaching and competing talent to his stable, He initially wants Olympic gold medalist Dave Schultz (Mark Ruffalo), but Dave is reticent to uproot his family and compromise his other commitments. du Pont then sets his sights on Dave’s younger brother, Mark (Channing Tatum), also an Olympian. Inarticulate, socially awkward and perennially in his brother’s shadow, before long Mark is almost completely under du Pont’s thrall, living and training at Foxcatcher, and falling to the temptations of du Pont’s decadent and eccentric lifestyle.

Bennett Miller’s film is a study of inarticulate, antisocial men struggling with their own desires and shortcomings. Of the three principal characters, Dave is the most normal – he has a wife and two kids – but even he, for all his obvious empathy, has trouble expressing himself. Mark is a note-perfect example of awkward masculinity: monosyllabic, lacking in confidence, unsure of himself and how he relates to other people. There’s a largely silent scene early on where the two brothers spar with one another for several minutes, trading slaps, shoves and grapples, communicating through physicality and gentle violence rather than words. At one point Dave gets a blood nose and shrugs it off. There was no malice involved; pain is just a part of the vocabulary that these two share.

And then there’s du Pont, an unpredictable hothouse flower of a man, completely attuned to a life of luxury where his word is never questioned, his bizarre tastes and peccadilloes always indulged. Carrell leans into the more outre elements of the character’s physical being- the Yankee accent, the slouched posture, the constantly cocked-back head – but although his du Pont is a cartoonish figure, he never crosses over into full caricature. That’s partly because du Pont always feels dangerous; his motives and drives are opaque*. He’s like a pet alligator – you could pet him a hundred times and not get bitten, and then one day lose your arm.

The violence, when it does come, is shocking, gut-churning and inexplicable; the results are mournfully sad and strangely, terribly inevitable. Miller and his writers have taken the basic shape of du Pont’s life and offences and created not a thriller, per se, but a tragedy in the Greek sense. Foxcatcher‘s fundamental story beats could easily have translated to something akin to a Hallmark Channel movie; instead, they’ve been elevated to something powerful, unsettling and almost mythic.

*That’s not entirely true; there’s a pretty obvious undercurrent of homoerotocism in du Pont’s wrestling obsession, culminating in a practice session with Mark that feels like a rape. He’s also carrying a raft of Oedipal issues. But focusing on just those seems reductive – he is both more and less than these drives.