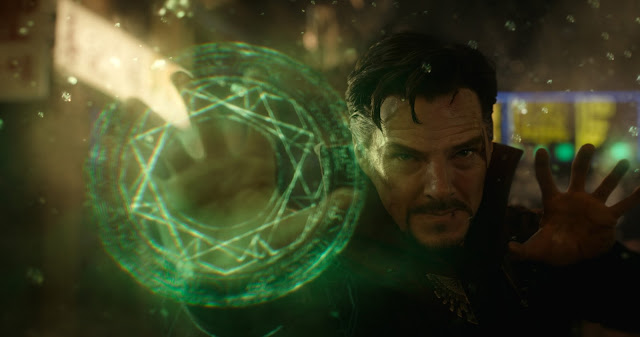 Even more so than Guardians of the Galaxy (Vin Diesel is a tree!), Doctor Strange is proof of the current primacy of the super hero film. Born out of the psychedelic ’60s and midwifed into existence on this plane be Lee and Ditko, Strange is a character who lives up to his name: an ascetic sorcerer operating out of a New York brownstone, dealing with magical threats to the world and traversing eldritch dimensions while muttering incantations that Lee pulled out of his ass but still had an authentic but hokey ring to them (by the hoary hosts of Hoggoth!).

It’s a shame, then, that such an offbeat (and pimp-lookin’ – top marks to the production team for sticking with the cape and jammies) character is constrained by the bog-standard Marvel origin template, which sees Strange (Benedict Cumberbatch, pretty great), an arrogant neurosurgeon, turn to the mystical to find a cure for his damaged hands after modern science fails film. Making a desperate pilgrimage to the Himalayas, he is trained by the inscrutable Ancient One (Tilda Swinton as Obi Wan/Morpheus/Ramirez) before eventually squaring up to Mads Mikkelsen’s visually striking but otherwise unmemorable corrupt magician , Kaecillius. Seeds are sown for future installments, not least of which is Chiwetel Ejiofor’s fellow mystic, Mordo, being set up as a future villain.

Look, it’s serviceable but, Christ, it’s nothing we haven’t seen before, and surely this is a character who would be well served by stepping outside of the normal bounds of the superhero origin movie. Strange’s raison d’etre is an interesting one, even if it is, particularly for a movie audience not steeped in comics lore, way too close to Iron Man’s, but it’s not necessary to dwell on it for the entire length of a feature film. For all it’s mystic woo and dimension-jumping, narratively the movie sticks to pretty familiar territory.

It’s fun territory, though. Cumberbatch’s Strange is more of a bastard than Downey’s Stark, but the attention to his trauma makes him easy to empathise with as we’re shown he can’t even shave or write his name following his car accident. Benedict Wong elevates his namesake character from taciturn manservant to a fully rounded and fun mentor figure, and Ejiofor is, well, Ejiofor – never not great. The design of the thing is uniformly excellent, especially when it’s cribbing directly from Steve Ditko’s artwork, and if you’re into that “hidden magic in the modern world” vibe, that box is repeatedly ticked. Ultimately, however, you can’t help but wish for a Doctor Strange that was a little stranger.