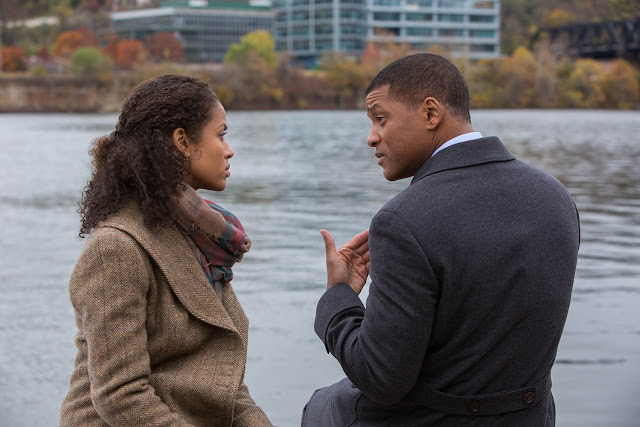 When he examines the body of famed former footballer Mike Webster (David Morse), Nigerian-born forensic pathologist Bennet Omalu (Will Smith) discovers evidence of serious brain damage that could have caused behavioural changes that drove the man to suicide. The damage comes from repeated, savage blows to the head – a common occurrence in the career of an NFL player. Omalu publishes his findings, but the monolithic NFL – an organisation with such cultural power we are told they own Sunday the way church used to – won’t have a bar of it. Over time, though, more former players start dying from the same syndrome, and so the stage is set for a classic David versus Goliath smackdown.

Based on actual events, Concussion wants to stake out territory in the same neighbourhood as Michael Mann’s excellent The Insider or even Alan J. Pakula’s All The President’s Men, and why not? All the ingredients are there. The thing is, those ingredients don’t mix as well as they should. Concussion is strongly directed, populated with well-drawn characters played by committed, talented actors, and deals with a situation – it stops shy of labeling it a conspiracy or a cover-up – that is both affronting and tragic. This should be gripping stuff. So why isn’t it?

Well, for one thing, as played by Will Smith, Bennet Omalu is perhaps the most saintly protagonist since Gregory Peck in To Kill A Mockingbird: a brilliant, driven, compassionate man, who treats the dead like living patients and feels a strong need to tell their stories for them. Omalu attacks his job as a pathologist not out of intellectual curiosity or professional ambition, but from a sense of duty that borders on the sacred. He’s also a man of faith: a devout Catholic who takes in and subsequently marries a Kenyan immigrant, Prema (Gugu Mbatha-Raw) seemingly out of a similar sense of duty.*

All of this may well be a matter of public record – Omalu is, by all accounts, a genius who holds multiple degrees in a number of disciplines, and a hell of a nice guy to boot – but it makes for a rather colourless protagonist to root for – he’s just so damn decent and unshakable. Smith gives a good accounting of himself in the role, but Omalu’s characterisation is pretty one-dimensional – what you see is what you get.

Concussion is also a film bereft of villains, in that the National Football League is largely portrayed as willfully ignorant rather than actively malicious, trying to maintain their position in the firmament of American life in the face of a medical scandal. This is not the shadowy evil of Big Tobacco, but an American institution as beloved as Thanksgiving dinner and apple pie. Omalu is shown to receive a fair whack of abuse once he goes public with his findings, but its characterised as coming from the general public, not the NFL as an entity. The two characters who are made to represent the NFL here are incoming Commissioner Roger Goodell (Luke Wilson) and former player Dan Duerson (Adewale Akkinuowe- Agbaje) is that they come across as either toeing the line (the former) or more concerned with their own success (the latter). The film alludes very obliquely to the possibility that Omalu and his family were tailed by someone but is careful not to lay the blame directly at the feet of the NFL.

Still, if Concussion doesn’t hang together as well as it should, it is a film filled with compelling moments, thanks to a truly impressive cast. Smith is as watchable as ever as Omalu, playing the doctor as articulate, compassionate and wryly funny, and he’s surrounded by a great ensemble: Albert Brooks as his mentor, Dr Cyril Wecht; Alec Baldwin as Dr Julian Bailes, the former Pittsburgh Steelers team doctor who breaks ranks to work with Omalu; Eddie Marsan as Dr Stephen DeKosky, who co-authored the initial paper (barely a cameo, but hey: Eddie Marsan).

The best performance, however, is the earliest and briefest: the great David Morse as poor, doomed Mike Webster. When we meet him he’s a broken man, living in his car, drowning himself in horrible cheap intoxicants and right at the end of his tether. We see a bit of him at the tail end of his career, and Morse makes it clear that the poor bastard is already affected by crippling brain damage, even as the NFL lauds his contributions to the sport. Morse’s hangdog face and soulful eyes work wonders here. The initial tragedy of Mike Webster is the hook the rest of the film hangs on, and so it’s odd that his story is kind of lost in the mix as events move forward. If the rest of the movie held the interest the way Morse does in his quick turn, we’d be onto something.

But it doesn’t. Concussion is the very definition of an okay movie: there’s no single or combined element that sinks the ship, but its too conservative and middle-of-the-road to really spark. It’s a blandly satisfying couple of hours, which is about the best and worst thing you could possibly say about the thing.

*Please understand I’m talking here about how it’s portrayed in the film and certainly not making judgments about the actual Dr Omalu’s home life.