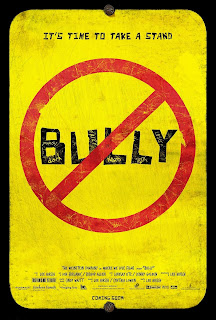 Remember the Days of the Old School Yard?
Directed by Lee Hirsch
Starring David Long, Tina Long, Ja’Maya Jackson, Kelby Johnson,
Bullying sucks, as anyone who had a hard time of it in school can attest. In tackling such a subject, documentary filmmaker Lee Hirsch shines a light on an issue that has affected countless lives. However, although the central tenets of the film are undeniably affecting, Hirsch’s overall thesis is distressingly simplistic.
Bully follows the experiences of a number of American school students. Young Alex, cruelly labeled “fish face” by his schoolmates, endures a daily dose of physical and psychological abuse from his peers, while his parents contend with school officials who are dismissive to the point of willful blindness. Lesbian Kelby, a star athlete who was ostracised by her basketball team after coming out, relates how her formerly well-regarded family was shunned by their entire community. A young African American girl, Ja’Meya, awaits trial for bringing a gun onto a school bus – her last ditch attempt to protect herself from her persecutors.
And then there’s Tyler Long and Ty Smalley. We don’t get to hear their stories directly; both committed suicide.
It’s certainly powerful material, with the most quietly devastating sequences involving David Long, the father of the deceased Tyler, grappling with the loss of his son and deciding to do something about it. A simple, man’s man kind of guy, avid hunter David devotes himself to Stand for the Silent, an advocacy group for victims of bullying. Watching this inarticulate man step out of his comfort zone to try and use communication to fight the endemic that claimed his child is simply heartbreaking.
For all that, though, there’s something at the core of Bully that niggles. There are choices that Hirsh makes as a filmmaker that trouble the viewer. How did he get this shot? Was that shot staged? How many cameras were present in this scene? There are many ethical dilemmas raised by the process of documentary making, and though Hirsch never slips into full-on exploitation, there are times when he skates awfully close to the line.
And, as mentioned, the film’s central ideas are painfully simple. Bullying is bad – yes, we get it. Hirsch never looks at the underlying causes, though. We never look at the home life of a bully, never see the root causes of such behaviour, never look at the staffing or funding issues that may be affecting a given school’s ability to cope with such problems, never consult academics or psychologists who may be able to give some valuable insight into the phenomena. All of which doesn’t excuse the behaviour on display – some the acts committed against Alex and company are downright appalling – but pretending that bullying exists in a vacuum is disingenuous.
Ultimately, though it professes to do otherwise, Bullydoesn’t tell us anything that we don’t already know. For all its stated intent to lift the lid off an under-discussed issue, it simply illustrates a problem we know exists, without pointing toward a solution that is desperately needed.
(First published in X-Press, issue  1332, 22/08/2012)