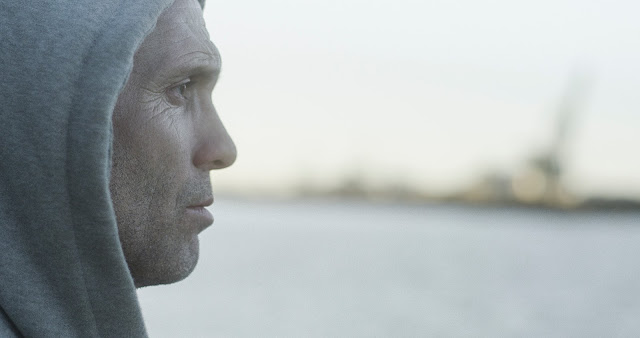 First time feature director Heath Davis gets strong performances out of a truly impressive Australian cast in this gritty look at third acts and second chances.

Ben “BK” Kelly (Steve Le Marquand) blew a promising Rugby League career when he was caught in a game-fixing scandal. Years later he’s a homeless, alcoholic gambling addict, pushing whatever money he can wheedle out of his rapidly dwindling circle of acquaintances into pokey machines. He’s rescued from the streets by Cec (Max Cullen) an old fan who recognises BK from his glory days and invites him into his home with an aim to cure him of his self-destructive tendencies. OF course, the key question is evident in the premise: can BK make a go of it, or will he screw it all up, like he has every other chance he’s had?

That’s a pretty well-worn, if robust, premise on which to hang a movie, but Broke is elevated by the quality of its players and Davis’ keen eye for telling detail. Shot and set in Gladstone, Queensland, the film’s canvas is a completely convincing milieu of cheap bars, pokie parlours, ageing working class housing and well-stocked pawn shops. Woven into the film’s fabric is an understanding of the relationship between the working (or former working) class and their sporting heroes, as evidenced by the mix of disappointment and grudging benevolence with which almost every character treats our fallen protagonist.

Le Marquand is simply fantastic in the central role, imbuing BK with a tangible sense of self-loathing that is gradually shed as he begins to grasp that the hope offered by Cec is not a mirage, but an actual possibility. Max Cullen – and really, it feels like forever since we’ve seen him in a prominent role – makes for a dependably grizzled mentor figure, both to BK and to his own granddaughter, Terri (Claire van der Boom), a single mother who lives with him.

Perhaps inevitably, BK and Terri embark on a tentative romance, a plot thread that at times verges on the tragicomic – BK’s idea of a classy date is dinner at Sizzler, plus their actual first date gets derailed when he’s pressganged into dish pig duty to pay for his long-neglected bar tab. There’s pathos here, though – the possibility that BK is going to drop the ball, pun only partially intended, is always present.

Support comes from a murderer’s row of great Australian character actors: Steve Bastoni as a former team mate who’s now a cop, Brendan Cowell as a gambling addict who blames BK for the shoddy state of his life, William Zappa as a trackside acquaintance, and Pawno‘s Damian Hill, who pretty much turns up just to get his head punched in by BK.

If there’s a problem with Broke it’s that the arc of the story feels inevitable, but perhaps that’s inherent in the subject matter. Still, this is a very impressive first outing; Davis’ authorial voice seems to be fully formed right out of the gate, and that’s rare.