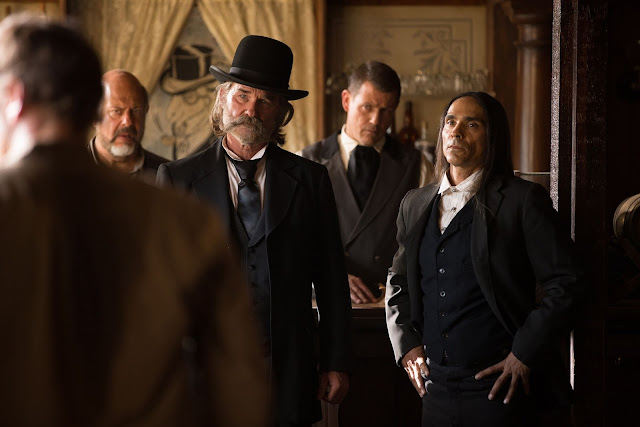 Genre mashups are tricky things to pull off, generally being canted too far in one direction tonally, and adhering only to the surface trappings of the other. Most horror comedies are really just comedies dressed up as horror movies, for example – although it’s easy enough to name some notable exceptions.

It gets even trickier when part of the genre combo is the venerable Western, a subset of film chiefly defined by its setting and iconography. Isn’t any movie set in in the 19th century west automatically a Western? I’d argue not. There are thematic elements that make a Western a Western, and they run deeper than the mere presence of big hats, big guns and horses.

S. Craig Zahler knows this. The author of a few well-received “Western noir” novels, he makes his feature directing debut here with Bone Tomahawk, a film that takes the Western well beyond the shores of noir and into the endless depths of horror.

Plotwise, Bone Tomahawk takes its cues from the best – in this case The Searchers – and puts a small group of protagonists on the trail of marauding Indians who have kidnapped loved ones. These kidnappers are not a band of renegade Apache or Comanche, though. As we’re informed by bonafide Native American The Professor (Zahn McClarnon), the wrongdoers are Troglodytes: a primitive, cannibalistic clan shunned by all the other tribes for their degeneracy.

That does not deter our band of laconic heroes: lawman Franklin Hunt (Kurt Russell), gentleman shootist John Brooder (Matthew Fox), bumbling deputy Chicory (Richard Jenkins) and rancher Arthur O’Dwyer (Patrick Wilson), whose wife is one of the missing, all dutifully troop off into the wilderness and right into the meat grinder.

Bone Tomahawk pits the unblinking stoicism of the pioneer hero type up against the relentless nihilism of survival horror – in this particular case, the cannibal movie. One of the key characteristics of the typical Western hero is their ability to withstand tremendous hardship and pain – what better crucible to test that in than a scenario that draws its inspiration from the likes of Cannibal Holocaust and The Hills Have Eyes? Comparisons have also been made to Joe Ketchum’s harrowing debut novel Off Season, and not without cause.

Zahler presents the violence in Bone Tomahawk as sudden, brutal and ultimately unstoppable. Ambushes happen with sudden, unhinted ferocity. Terrible wounds are suffered and limbs lost in the blink of an eye. It’s genuinely shocking stuff. We know these men are tough – Wilson’s character makes the journey on a broken leg, for Christ’s sake – but how much is tough worth in this situation? One particularly brutal sequence, in which a captive is butchered for meat while still alive, stands as one of the most shocking I’ve personally seen in a very long time.

Which means, of course, that it’s not for everyone, but horror films – the good ones, at least – never are. Bone Tomahawk is gory and deeply unsettling, but it’s also thoughtful, nuanced and laced with a deliberate counterpoint of humour, largely from Jenkins’ Chicory, whose simple view of the world is at times completely baffling to those around him. Zahler understands the need to shift gears in order to maximise the impact of his more shocking scenes – which puts him ahead of, say, Justin Kurzel, whose recent Macbeth proved that “none more black” gets boring after a while. Tomahawk takes its time, letting us hang out with our posse, building both empathy and tension before the inevitable third act slaughterhouse, and is all the more effective for it.

This is not a film for people who like their horror contained and comforting, and it’s not for people who think Westerns are a simplistic, played-out genre*. In point of fact, However, if – like me – you’re in that sliver-thin Venn overlap that includes horror fans and Western buffs, Bone Tomahawk really needs to be at the top of your To Do list.