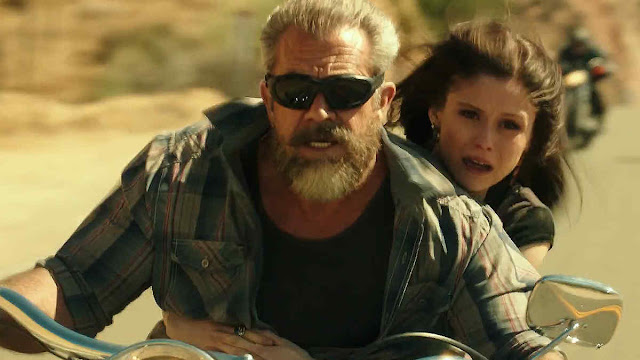 Directed by Jean-Fracois Richet
Starring Mel Gibson, Erin Moriarty, Diego Luna, Michael Parks, William H. Macy
A geriactioner for people who found the ugly gender politics of Taken too subtle, Blood Father sees John Link, Mel Gibson’s years-sober former outlaw biker, back in action when his errant junkie daughter, Lydia (Erin Moriarty), crashes back into his life, desperate for money and/or help (but mostly money) after crossing Diego Luna’s cartel heir. The rest of the movie is spent cartwheeling across the SoCal desert from setpiece to setpiece, trying to convince us that some kind of relationship is being forged between the gruff Gibson and the scattered, incredibly poorly written role foisted upon poor Moriarty. There isn’t, which means the final, visible-from-miles-away pay-off lands with a thud.
It’s a crying shame, because the bones of a good movie are present. We don’t need complexity from a film like this, we need consistency, and Blood Father fails to deliver: morally, thematically, narratively. Gibson does solid work here and it is an utter pleasure to see him back in the saddle, and he’s ably supported by Bill Macy as his best mate/AA sponsor, and Michael Parks as a less-than-trustworthy old associate (Dale Dickey turns up playing the role Dale Dickey always plays, too).
Moriarty’s errant daughter is a total mess of a character, though, acting any way any given scene needs her to act in order to move the action forward or create drama. You could blame it on the drugs (she’s methed up as hell when we meet her, and Gibbo has to dry her out) but only if you haven’t spent enough time around drugs. Likewise, the villains don’t make a whole lot of sense. It’s explicitly stated that Luna’s drug baron is using Lydia as a cut-out for part of his narcotics ring, but then he has her name tattooed on his chest – that’s amazingly poor tradecraft. Still, it’s a pleasure to see Raoul Trujillo show up as a particularly terrifying sicario.
There’s a strong redemption-through-sacrifice theme running through the whole thing, as is to be expected given Gibson’s oeuvre, but it never connects as well with the meat of the story as it should. Blood Father is not enough fun to be an enjoyable B-movie, and not clever enough to transcend its genre trappings ala The Limey or Killing Them Softly. One spin is enough for this one.
TRAVIS JOHNSON