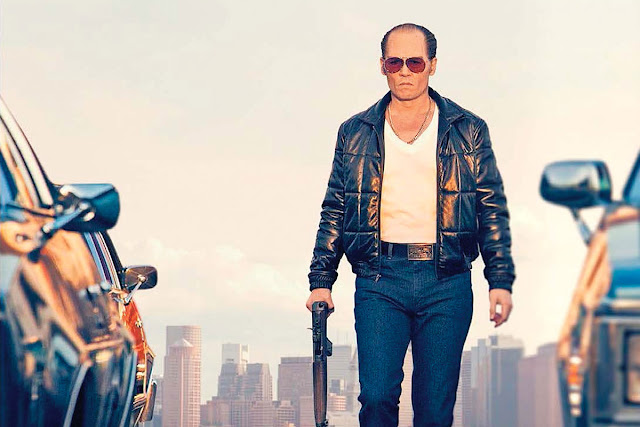 Black Mass is a hollow experience, and not all the hairpieces, facial prosthetics and pantomime Southie accents can make up for that. It looks the business and it boasts some fine performances, but it offers no insights. It has nothing to say about one of the most fascinating and notorious criminal figures of the 20th century.

Starting in 1975, Boston gang leader Whitey Bulger (Johnny Depp) operated under the protection of FBI Agent John Connolly (Joel Edgerton), himself a native of South Boston and a childhood acquaintance of Bulger’s. Ostensibly, Whitey is Connolly’s informant, giving him information on the Angiulo Mafia family, rivals to Whitey’s on Winter Hill Gang. In truth, Bulger’s crew have almost complete protection from prosecution, and use this advantage to claw their way to the top of the pile.

Now, that sounds like a hell of a story, and it’s one that’s already made its way to the screen in a roundabout way: Martin Scorsese’s The Departed, although based on the Hong Kong thriller Infernal Affairs, lifts some biographical elements and a lot of flavour from the Whitey Bulger saga. Black Mass, based on the non-fiction book of the same name Dick Lehr and Gerard O’Neill, hews more closely to the established facts of Bulger’s life, but fails to galvanise those events into any kind of thematically cohesive narrative.

Director Scott Cooper seems extremely reticent to delve into the relationships that underpin the story. There are two key dynamics at play here: one between Whitey and his brother, William “Billy” Bulger (Benedict Cumberbatch), who is a figure of some power in the Massachusetts State Senate. Surely that’s a relationship that could be milked for some drama, but no: Cooper leaves it on the plate, with Cumberbatch’s performance adding up to little more than a cameo.

The other is that between Whitey and Connolly. Connolly was corrupt, yeah, but as an onscreen coda informs us, he also refused to testify against Bulger when the hammer finally came down, resulting in a 40 year prison stretch being laid on him. That’s a spectacular and sobering display of loyalty, but here’s the thing: the film in no way justifies that kind of gesture. There’s a scene or two where Whitey and Connolly break bread together and we get the idea that they socialised, but there’s no depth to their dynamic: we don’t know these guys, and we don’t know what they think of each other. You could speculate that, with so many of the key figures still walking around capable of litigation, the call was made to downplay any outright speculation regarding things not strictly on the record or devoid of real controversy, but that makes for a pretty flat movie.

That’s a shame, because both are labouring manfully with the material they’ve been given, Depp most of all. This is Depp embracing Serious Acting after almost two decades of silly hat performances, and it shows. He’s a magnetic, eminently watchable presence in the film, so it’s a damn shame that the script chooses to keep Whitey Bulger as an almost complete cipher. Some lip service is paid to various possible formative incidents – the death of a child, the death of a parent and, most intriguingly, a government LSD experiment undertaken in prison*, but it doesn’t add up to much.

He’s not alone there – we get absolutely no access to the inner life of anyone we meet in the course of the film. There’s a moment early on where it looks like Jesse Plemons, who’s in just about everything these days, is being set up as out Henry hill point of view figure, but that’s quickly dropped. And it seriously took me until the end credits to twig that what I thought was one character was actually two, played by W. Earl Brown and Rory Cochrane – in look, character and narrative purpose, they are functionally identical.

In the end, Black Mass is all surface – and that’s fine if that’s what you’re into; we’re all big fans of cinema du look around here. But it’s dressed up in the skin of a serious, prestige pic, and it utterly fails to meet the standard its set itself. Many pundits criticised The Departed for being a disposable bit of pulp cinema – and it kind of is – but it says more with its lurid, hyperbolic take on the material than Cooper’s self-serious exercise ever could. Black Mass is a fearful film – fearful of having an actual opinion about the events it depicts, and that approach ultimately dooms it to mediocrity.

*Totally true! Whitey was experimented on by the CIA’s MK-ULTRA program!