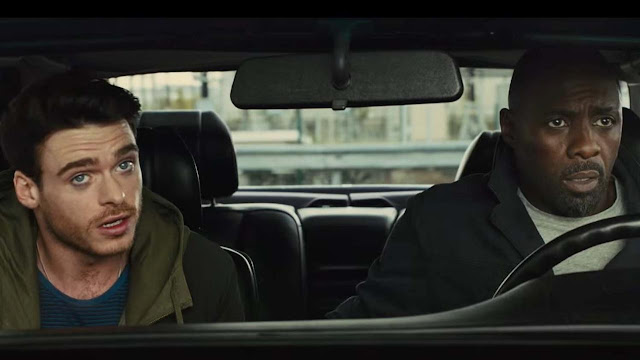 Assembled out of the leftover parts of a hundred better action movies but still managing to be generally entertaining enough, Bastille Day is the EuropaCorp movie you have when you’re not having a EuropaCorp movie.

Basically playing out like a saner version of Pierre Morel’s From Paris With Love, Bastille Day sees Idris Elba’s hardened CIA operative team up with Richard Madden’s expat American pickpocket to try and stop a series of terrorist actions leading up to the titular French national holiday. The film scavenges elements from 48 Hours and Die Hard to build its rudimentary but functional narrative chassis, giving our mismatched heroes both a deadline and a mysterious enemy whose motives may be more than what they seem. Also along for the ride is Charlotte Le Bon’s lefty dupe (she was supposed to plant the initial bomb that gets things rolling, but is compelled by her conscience to bug out instead), along with occasional appearances by Kelly Reilly – who’s really too good for this stuff – as the CIA’s Paris station chief.

There’s nothing too original going on with the plot, but there are cultural details and clever bits of business that elevate the proceedings, such as the antagonists’ plan essentially hinging on the French tendency to riot in the streets at the slightest provocation, and a sly commentary on clicktivist mob mentality. Director James Watkins (The Lady In Black) stages the action with clarity and occasionally even flair; we’re never in doubt of what’s happening in the numerous fight scenes, and one skirmish in particular, which takes place in the back of a SWAT van, is genuinely impressive.

Really, it’s the two leads who keep Bastille Day‘s head above water. Elba gets to be granite-faced and tough as nails, blithely damaging actual bad guys and hipster radicals alike in his quest, while Madden has fun as the romantic loner with a shady past adrift in a foreign city – a character type we just don’t get enough of these days. All told, this is a buck and a half of serviceable, enjoyable but ultimately forgettable Continental thrills – it’ll scratch that itch for you if you feel it needs scratching, but it’s not one for the collection.