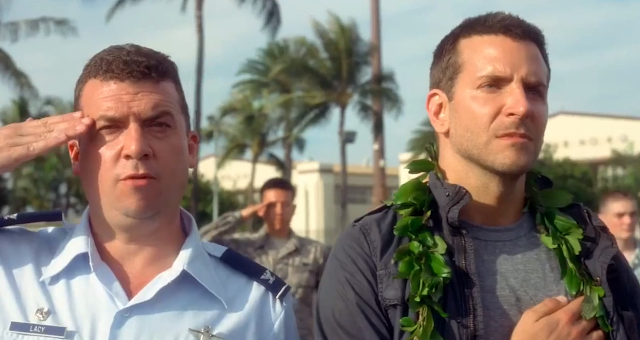 Hoo boy. Where to start?

Cameron Crowe does a certain type of narrative very well, and it deals with men at a crossroads in their life who have to decide what kind of man they really are. That sounds pretty general, but if you take Jerry Maguire as the ur-example, you can see what I’m getting at. Even the kid in Almost Famous, certainly Crowe’s most personal film, is wrestling with the same issues, and they all come to a head in the hotel room where Penny Lane ODs.

In Aloha, the moment of crisis comes in a secret space vehicle mission control facility, and Brian Gilcrest (Bradley Cooper) needs to choose not only what kind of person he is, but whether he will allow a shady billionaire played by Bill Murray to put a secret nuclear payload in space. This is Cameron Crowe’s techno-thriller, kind of, and if that sounds like a poor match of material and artist, well, you’re not wrong.

In fact, there’s enough material here for a good half dozen movies, and perhaps if Crowe had picked one, or even a couple, we might have wound up with something worth watching. Instead, we’ve got a horribly overstuffed and tone deaf mess.

Cooper’s Gilchrist is a former Air Force pilot now working as a bagman for Carson Welch (Bill Murray). He’s essentially a burned-out mercenary, but Crowe never makes that character element land with any impact. Gilchrist has returned to Hawaii after an extended absence to negotiate with the indigenous Hawaiians on behalf of his employer. He also reconnects with  a former flame, Tracy (Rachel McAdams), who is now married with two kids, while at the same time developing a growing attraction to his military handler, Captain Alison Ng (Emma Stone, and we’ll get to that in a minute). Throw in some Hawaiian mythology, mostly delivered via Tracy’s precocious son, Mitchell (Jaeden Lieberher) and you’ve got… well, not much. Or maybe too much.

It’s hard to criticise Aloha for failing to achieve what it sets out to do, because exactly what its goals are remain nebulous at best. Obviously we’ve got Gilchrist’s redemption at the core, but since Cooper never convinces as a wounded warrior to being with – even his physical injuries (he got pinged by a drone in Afghanistan) are written off with an odd post-coital joke – his journey never adds up to much. Crowe also seems largely disinterested in the military-industrial complex shenanigans that take up a lot of the plot, which actually makes it difficult for the viewer to parse what is going on – the stakes are never clear.

Many of Gilchrist’s decisions seem arbitrary – even his choice of romantic interest seems off the cuff. Indeed, much of the film suffers from that same lackadaisical feeling, including repeated attempts to make Gilchrist’s “journey” jibe with the myth of Lono, a major figure in the Hawaiian pantheon. Crowe weaves in a fair amount of Hawaiian culture and history – he even gets Hawaiian sovereignty* activist Dennis “Bumpy” Kanahele to play himself – and these are some of the more engaging parts of the film, but in the end they’re reduced to background colour for some white guy’s mid life crisis. Hawaii is a beautiful place and an exotic one, but that exoticism should maybe not extend to the characterisation of the people who actually live there and contend with the issues Crowe introduces and then blithely ignores.

The most problematic element here is Captain Ng, Stone’s character, who is apparently one quarter Hawaiian, one quarter Chinese and half Swedish – a bit of a stretch for the fabulously pale Stone. The internet blew up over her casting these last couple of days, and Crowe has issued an apology/explanation of sorts, where he pretty much admits he didn’t think representation was an issue, given the film’s reverence for Hawaii as a place and a culture – which would make sense if Ng wasn’t the only major character with Hawaiian ancestry. All the other Hawaiians in the film are “friendly native” bit players – even Kanahele, who used to be a hell of a thorn in the US government’s side (and still occasionally is). Indigenous Hawaiians don’t even get one character to themselves – they get a quarter.

Rambling, clumsy and toneless, Aloha is a massive misfire for a populist talent like Cameron Crowe. Individual elements occasionally pop – it’s hard not to smile at Bill Murray and Emma Stone cutting a rug, for example – but as a whole, it’s a failure. Have a holiday at home instead.