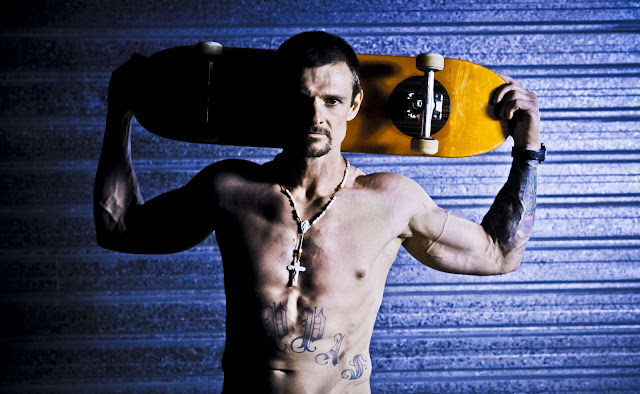 Directed by Eddie Martin
Starring Tas Pappas, Ben Pappas
Films about skateboarding in particular and extreme or street sports in general are something of a cottage industry these days and you could be forgiven for thinking that they’re all much of a muchness – the great irony of any subculture is that the fine details that differentiate members from one another are indiscernible to tribal outsiders, and the same goes for that subculture’s art. All This Mayhem, however, stands out from the pack.
Directed by Eddie Martin, All This Mayhem occupies an interesting space between his first two films: Jisoe, his portrait of graffiti artist Justin Hughes, and Lionel, his account of the life of Indigenous boxer Lionel Rose. Martin’s latest is an account of the rise and fall of Melburnian skateboarding brothers Tas and Ben Pappas, who came to prominence in the scene in the ‘90s, when the commodification of skate culture was at its height. Rising from the street skating scene in Prahran, the two became global superstars, complete with a rivalry with Tony Hawk, before the relentless hedonism took its inevitable toll on the two self-described bogans.,
Martin mixes talking head interviews and an impressive amount of archival footage to tell the tale, with editor Chris King, who worked on both Senna and Exit Through The Gift Shop, welding the two together to form a relentless juggernaut of a story that moves from the dizzying highs of fame and fortune, to the horrific lows of addiction and violence with whipcrack speed.
For all the spectacle of the skateboarding scenes, it’s the inevitable downfall that resonates most strongly. In the final analysis, the film is a tragedy, tracing the paths of two guys who were given everything they could ever want except for the ability to consider the consequences of their actions. Time and distance has given key interview subject Tas Pappas some perspective, and it is his remarkable candour and honesty that really make the film soar.
You may have seen skate culture docos before, and you’ve almost certainly seen rags-to-riches-to-rags stories before, but All This Mayhem’s combination of the two is quite singular in its effect. Not just a film for the subculture it depicts, this is a compelling portrait of lives lived in freefall, and well worth tracking down.
TRAVIS JOHNSON