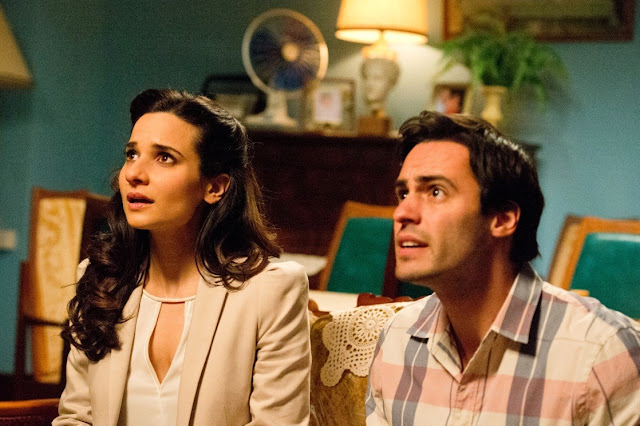 Adapted from his own stage play by screenwriter and co star Alex Lykos, Alex & Eve takes some familiar rom com tropes and gives them a bit of life by viewing them through the filter of modern Australian multicultural society.

The story is rooted in the old Romeo And Juliet tango: Alex (Richard Brancatisano) is a good Greek Orthodox boy, while Eve (Andrea Demetriadis) is a dutiful Lebanese Muslim girl. They’re both good at thier jobs – she’s a lawyer, he’s a teacher – they both still live at home – “rent money is dead money” both sets of parents aver – and they’re both chafing under the strictures of their more traditional parents. Alex’s folks (Tony Nikolakopoulos and Zoe Carides) are keen for him to settle down with a nice Greek girl, just like his older brother Stavros (writer Lykos), while Eve has already been promised in marriage to a devout Lebanese man she met on vacation, much to her consternation. Naturally, these two meet cute and fall in love and, naturally, their families lose their minds.

Never underestimate the power of charm – it can get you a lot further than innovation or complexity ever will. With two exceedingly charismatic leads, a simple but robust plot and a light, cheery tone that is leavened here and there with some poignant points about love, culture, family fidelity and personal freedom, Alex & Eve provides an almost perfectly calibrated mix of laughs and romance. It sets out its aims quickly and clearly, gets you invested in its characters and their dilemma, and heads for the finish line without too much dithering.

While we’re at it, never underestimate the importance of representation. If you’re like me – white, straight, Aussie dude – your notions of Australian ethnic comedy might be coloured by grim memories of Nick Giannopolous’ seemingly endless and awful oeuvre and you’re adjusting your expectations regarding Alex & Eve accordingly. Well, here’s the thing: at the screening I attended I was, my hand to Zeus, the only non-Greek person in the audience, and while I was vaguely ruminating on stereotypes and cultural cringe, everyone else absolutely roared with laughter. People love seeing themselves in their pop culture and – sometimes -stereotypes exist for a reason. Tony Nikolakopoulos’s character is, to my eyes, a six foot stack of cliches; to everyone else who was watching that night, he was a spot-on parody of a very recognisable type of old Greek dude. We winds up being the comedy MVP.

Alex & Eve is far from perfect. There are time it cribs a little too liberally from other romantic comedies – we get lifts from Manhattan, When Harry Met Sally and The Graduate, among others – and you could map the general drift of the plot blindfolded. But so what? There’s a place for breezy, bright rom coms in the cinematic firmament, and this is one of the better examples of the type – and certainly one of the best Australian ones to come along in some time.