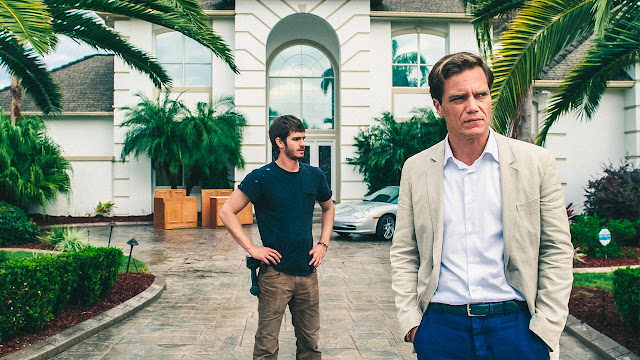 For what shall it profit a man if he shall gain the whole world and lose his own soul?

That’s the thesis question of 99 Homes, a morality play set in the cutthroat world of post-GFC real estate profiteering.

When out of work construction contractor Dennis Nash (Andrew Garfield) defaults on his house payments he, along with his mother (Laure Dern) and young son, is summarily evicted from the family home. Representing the bank in this process is realtor Rick Carver (Michael Shannon), who has gotten rich by flipping the homes of people who can’t keep up their payments.

Carver is venal and callous, making his money by facilitating people being thrown into the street. But that’s the thing: he’s making money, and he seems to be the only guy around who is. So, in due course Dennis finds himself working for Carver, at first doing odd jobs and maintenance, but soon becoming a kind of right hand man/apprentice to the mogul. Dennis tells himself he’s only in it until he can buy back his family home, but there is so much money to be made…

We’ve seen this kind of story before, and the most obvious antecedent is Oliver Stone’s Wall Street. Carver is a more down-market Gordon Gekko, a new money millionaire with a privateer’s eye for profit and a blur collar orphan’s burning need to pull himself a few rungs further up the ladder than his ancestors ever made it. Shannon’s robust, muscular performance makes Carver’s worldview sound very appealing: he’s not the bad guy, he tells us, he’s just navigating the landscape around him as best he can, and playing by rules that everyone knows.

Except he is a bad guy, of course, and the central irony here is that Dennis is working to get his family back on the level by doing to other people the exact same thing that was done to him. It’s a shame, then, that his moral arc doesn’t resonate as strongly as it should: he lacks the self-awareness necessary to really agonise over his choices, and his ultimate ethical decisions are fairly predictable.

99 Homes is a solid drama but falls short of greatness. It’s goals are obvious and noble, but writer/director Ramin Bahrani doesn’t quite make them land with the necessary impact. Still, a killer turn from Shannon makes it worth a look.