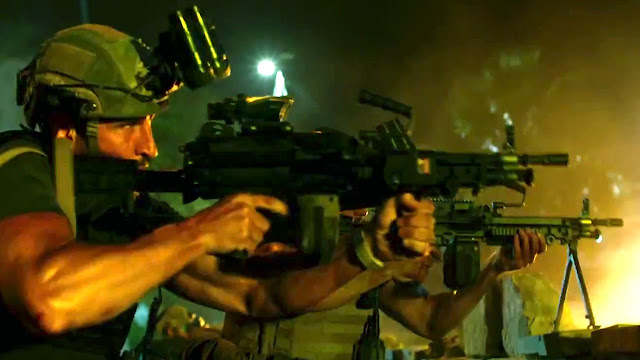 Michael Bay has built his career on the fetishisation of elite American military personnel – it’s the reason why the robot characters of Transformers are supporting elements in their own big screen franchise – so the notion of him calling the shots on a film based on the 2012 Benghazi attack might be cause for pause. Rethink that, though; while he occasionally lets his stylistic excesses get the better of him, 13 Hours: The Secret Soldiers Of Benghazi sees the Prince of Pyrotechnics in a relatively restrained mode, and the result is worth your time.

He does love his Spec-4 operators, though. In Bay’s world, only elite infantry soldiers are capable of dealing with crisis, and everyone else is an inconvenience at best, a dangerously wrongheaded obstacle at worst – and if you push paper for a living, you better believe that you fall into the latter camp. Even lesser warriors are held in mild disdain. It’s a lesson that’s drummed home repeatedly.

So naturally, when insurgents attack the US’s diplomatic mission in Benghazi, in the aftermath of the fall of the Gaddafi regime, it’s the mixed bag of military contractors guarding the CIA installation just a up the road a piece who must mount a rescue mission. And when the mission falls and veritable hordes of Islamic militants assault the CIA stronghold, it’s this same team of mercenaries who must head up the desperate defence until rescue comes.

All this is, of course, based on actual events, or at least author Mitchell Zuckoff’s account of actual events, which was written with the cooperation of the actual security team. Bay’s usual concerns map onto the events so congruently that it feels like there’s very little in the way of embellishment, and certainly no recourse to the bombastic, over the top action choreography the director is (in)famous for. The fight sequences in 13 Hours are incredibly tense rather than cathartic, mostly relying on a clear understanding of who’s where and what’s happening at any given time to generate suspense. There are a couple of exceptions: the initial rescue mission into the burning mission is deliberately disorientating, for example. Mostly, though, Bay makes sure we know what’s happening at any given time.

Paradoxically, the film keeps us on the back foot by never clarifying why anything is happening. The Libyan city of Benghazi is depicted as a chaotic mess, where the rule of law is tenuous at best and competing militias and insurgent groups control the streets. The identity of the group or groups attacking the American installations is never made clear, although Bay singles out one insurgent as a point of recognition for us. For the defenders, it’s maddening: again and again we see them unsure how to act, not knowing whether a local is a friend or an enemy. At one point a man in a nearby house watching television waves cheerfully at a soldier walking perimeter during a lull in the assault. It’s surreal.

There’s also an admirable lack of flag-waving and recrimination in the film. The Benghazi incident has become a rallying call for the American hard right, viewing it as a failure of the State Department under Hillary Clinton. Bay’s film refuses to take a partisan stance, and even takes the time to humanise the attackers to a degree, showing Libyan women searching for their loved ones in the battle’s aftermath. Rather than appeal to patriotism – there are a couple of shots of the American flag, but neither, taken in context, can be viewed as jingoistic – Bay leans into the notion of Family As Sacred. All the security operators are married, we’re told, and we repeatedly see them make video calls home or gaze longingly at family photos.

Unfortunately, it doesn’t quite work: the film positions these men as figures to be admired, not guys to be empathised with. While some minor concessions are made to differentiate them – one dude reads Campbell, another is James Badge Dale – the overall effect is a kind of amorphous anonymity; everyone has a beard and wears the same clothes, everyone disdains outside authority but calls his fellow badasses “brother”. John Krasinksi’s character Jack Da Silva, new to the assignment and acting as our entry point into this world, stands out because, well, he’s played by the guy from The Office, but functionally he differs little from the others. Interestingly, the real man he’s standing in for remains anonymous, and so we’re forced to question how much of what we see of him – his statements, his choices, his family back home – is accurate, and how much is invented whole cloth. That’s not something you want your audience to be wrestling with. It’s difficult to quickly sketch characters in an action thriller, even more so when you’re trying to respectfully approximate an actual person; that 13 Hours fumbles it a bit isn’t a dealbreaker, but it’s a concern.

If Ridley Scott’s Blackhawk Down is the high water mark of the modern “real life” military thriller and the bottom of the ladder is a no-score tie between, say, American Sniper and Lone Survivor, 13 Hours sits comfortably in the upper third. It’s not the consummate technical achievement that the former is – although people who think Bay has no talent for composition and staging should watch this and then shut up – but it lacks the egregious political agenda of the latter. It might actually be the best film Michael Bay has ever made; whether or not that’s damning it with faint praise is left as exercise for the reader.