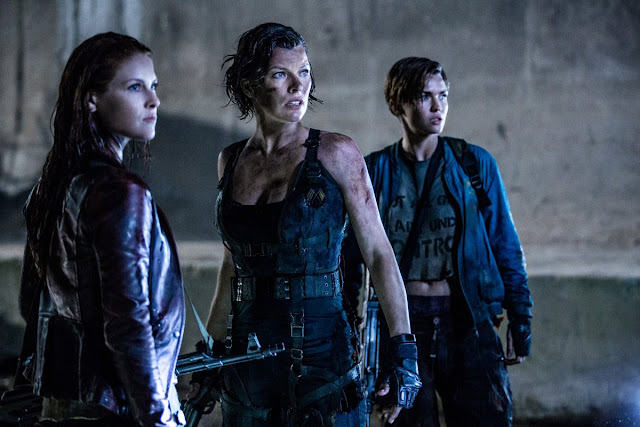 Directed by Paul WS Anderson
Starring Milla Jovovich, Iain Glen, Ali Larter, Shawn Roberts, William Levy, Ruby Rose
Christ knows what happened in the last couple of Resident Evil movies – I know I’ve seen them, but the details completely elude me. Luckily we get a quick recap at the top end of this, the sixth and purportedly final film, leading into a pretty basic “The Princess is in another castle” plot that sends our taciturn, tightly dressed heroine, Alice (Milla Jovovich) back to Raccoon City, where it all began, to finally save the increasingly fucked up and zombie-plagued world.
That’s pretty much all you need to know, and it’s a blessing – the Resident Evil franchise had gotten increasingly moribund and convoluted over the course of its weirdly popular life, and the simplicity of this installment opens it up to newcomers who, if they’re fond of fast action, dour-and-dingy production design, and decent actors knowingly slumming it (lookin’ at you, Iain Glen), will have themselves a time. Director Paul WS Anderson still cuts his fight sequences too fast, but there’s the odd impressive flourish, the odd gory-but-not-too-gory-death, and even the odd nice visual: a horde of zombies jogging after an armoured convoy, liquid fire raining down from a derelict building cum last redoubt, a zombie dog sinking into dark water with no air in its lungs or fat on its body to buoy it.
Problems? Well, it’s dumb as fuck. Normally you have to be pretty smart to be good dumb fun; RE6 is dumb and fun without being good. Characters are barely sketched and it’s up to the actors to try and wring characterization out of what they’re given to work with, which leaves poor Ruby Rose utterly up the creek (I don’t think her character is even named onscreen). It also takes itself a little too seriously in places – you can never quite tell if the film knows how ridiculous it is or not, but that could be part of its charm. Also, Shawn Roberts’ secondary villain has one of the worst character designs I’ve ever seen. On reflection, that’s not a major flaw, but it bugs me.
Look, anyone with even a passing acquaintance with the Resident Evil franchise has a fair idea of what to expect, and my job is basically to tell you that it’s one of the better films in the series. That said, if you’re staunchly against this kind of nonsense, don’t expect this one to convert you.
TRAVIS JOHNSON