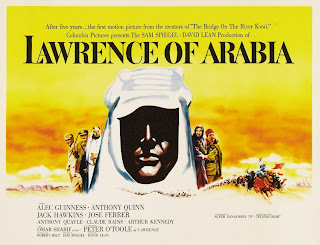 Lawrence of Arabia is, hands down, one of the greatest films ever made. Perhaps the greatest. David Lean’s 1962 epic  hearkens back to the golden age of Hollywood with its jaw-dropping scope and spectacle, while edging towards what we understand to be modern cinema with its political and cultural complexities, its maddeningly unknowable central figure, its indelible mix of cynicism and hope. When they say, “They don’t make ’em like that anymore,” this is the film they’re talking about.

Now it’s playing in Perth. Once.

I didn’t organise this, but not for lack of trying. 70mm projectors are thin on the ground around here, and the only Australian print was ruined by the Koreans. What I did do, though was hassle Darran Price of accessreel.com until he put a considerable amount of money and effort into getting the brand spanking new restored digital print over here. All credit goes to Darran and company; I was simply the annoying voice he needed to silence.

So now, for one afternoon only, on Sunday, November 4th, 2012, Lawrence will take Aqaba for our edification and entertainment. Tickets are not yet on sale, but full details can be found here. I’ll be there, and I’ll judge anyone who isn’t pretty goddamn harshly. This is, after all, a rare and momentous event, and anyone who thinks their loungeroom is a good enough place to see a film of this scale is beyond redemption.