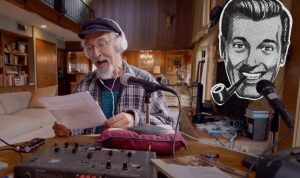 If you’re a regular rambler off the cultural beaten track you’re no doubt familiar with the satirical religion that is The Church of the SubGenius, that loose affiliation of merry mutants who kneel at the altar of their smiling, pipe-smoking icon, J.R. “Bob” Dobbs and venerate the ineffable quality that is “slack”. In which case you don’t need me telling you to get along to this one, it’s a hoot. If you’re not familiar with all this malarkey? Well, you’re in for a treat.

In suitably loose and woolly style, director Sandy K. Boone lets the key members of the Church, chiefly co-founder and spokesfreak Ivan Stang, to narrate its founding in the late ’70s, its growth to some kind of prominence in the ’80s, its belief system and doctrine, and so on. It’s a fun ride – the Church is basically an absurdist project with vaguely Discordian themes whose main remit is to ruthlessly take the piss out of mainstream institutions and mores, which is always a good time.

Up until it isn’t, of course, and Boone fails to interrogate what being the original trolls means in the  age of 4Chan. The Church of the SubGenius was always a relatively benign band of culture jammers and skeptical humanists, but the line between J.R. “Bob” Dobbs and Pepe the Frog is a pretty straight one, in form if not in ideology. It’s a shame that this evolution, and the ways in which the tools and techniques pioneered by Stang and his people are now employed, is not explored much.

Instead, the whole things comes across as a kind of fond recollection of a weirdly more innocent time when the culture wars were fought with blanks. Celebrity fans and adherents show up to sing the appropriate hymns, including Richard Linklater, Penn Jillette, Nick Offerman, and a goodly percentage of DEVO, and the somewhat rueful observation that the Church is now a redundant source of satire in the Trump age because reality has become too weird to parody is sure to strike a chord. If nothing else, the SubGenii seem to having more fun that the guys in the The Satanic Temple, if Hail Satan? is anything to go by.

J.R. ‘Bob’ Dobbs and the Church of the SubGenius is screening at the Melbourne Documentary Film Festival, which runs from July 19 – 30. For more info, hit the official site.