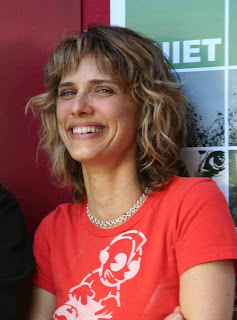 The Sisterhood
Director Lynn Shelton’s fourth feature film, the funny and heartfelt Your Sister’s Sister, is easily her best yet; a poignant, often hilarious meditation on the complexities of both romantic and familial love. Yet Shelton is keen to make sure she’s given all the credit, pointing out that the initial idea did not spring from her.
“Mark called me,” she tells us, referring to male lead Mark Duplass, a filmmaker in his own right. “We’d made a movie together before called Humpday. He had a kernel of an idea that was a potential Duplass brothers movie, because he and his brother, Jay, make movies together too. They realised that they probably weren’t going to be making it any time soon, so Jay gave him his blessing to bring it to me as a potential way that we could actually work together again.”
From the bones of the central idea, Shelton worked up a fleshed-out narrative, but it should come to no surprise to anyone who has seen the final product that the rich, naturalistic dialogue was largely improvised by Duplass and his co-stars, Emily Blunt and Rosemarie DeWitt.
“The improvisation was only employed to create realistic dialogue,” Shelton says. “I really like to have the structure laid out. We had the beats that had to be hit, the dynamic shifts, and we were just figuring out how we would get to there.”
Such freedom to experiment with the form of the film was largely possible due to the project’s small scale, which Shelton views as a distinct advantage. “I recognize a doable movie when I see one. I really liked the chamber piece kind of idea of creating an entire movie out of a condensed period of time, with a very small cast, and essentially one main location. It’s producible – I shot it in less than two weeks – but also, I really enjoy those films, because you can really turn a microscope on people’s inner dynamics, and really get to know them, as an audience. Plus, you can spend a lot more time on set just shooting and rolling the cameras, instead of moving to another location, or setting up a crane shot, or whatever it is. That’s what I love to  as a director, is to really get in there with the actors and try to find those moments.”
But Shelton is at pains to point out that another, more intangible factor was even more vital to the process.
“Trust is paramount,” she insists. “It’s very, very important. We had a very small crew, only a certain number of people in the room at any one time, and they were all people I’d worked with before; people who know I like to create a very emotionally safe, very actor-centric set. They’re very sweet people, very gentle, and funny, and while there’s always stress, they handle stress in a very healthy way.  I wanted to create an experience that everyone would want to repeat. And the emotional safety is not  just important for the cast, it’s important for the crew as well. I wanted everyone to be able to bring their best energy, and that’s the kind of environment I find that people flourish in.”
(First published in X-Press Issue  1334 05/09/2012)