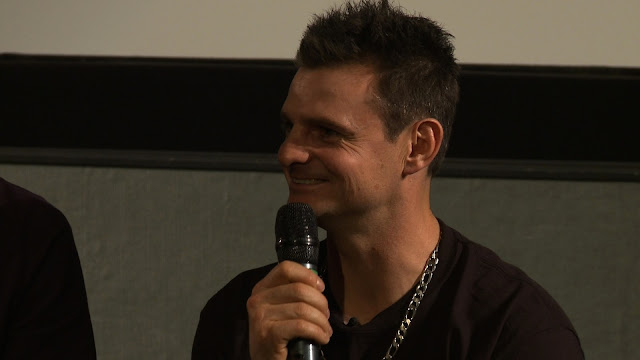 Having come up on the same Melbourne streets as skate star brothers Tas and Ben Pappas, Australian documentary filmmaker Eddie Martin was in a perfect position to tell their story in his new movie, All This Mayhem – but it wasn’t easy.

“I’ve always been attracted to stories about outsiders,” Eddie Martin tells us in his distinctive, laid back drawl. “I knew the brothers as kids – we were all locals down at the Prahran Skate Park. We kind of went our separate ways but, as you do, I sort of followed their story because they went on to do such amazing things.”
The two brothers he speaks of are Tas and Ben Pappas, who did do amazing things in the world of professional skateboarding, before their world came crashing down in maelstrom of drugs and violence. It’s a thorny story and one that certainly doesn’t always show its key players in the best light, but while a previous attempt to make a cinematic account foundered back in 2011 after the Pappas family condemned it, Martin enjoyed relative freedom of access.
“Me knowing some of the key players helped and we kind of rallied together to tell the story the right way with the real people. We knew you couldn’t tell the story without Tas because I knew this was a story about brotherhood. I hadn’t been in the scene for a while and there was a little bit of trust building. It did help; it definitely helped, there’s no doubt, in finding the archival footage because I knew some of the guys who had some of the key footage because they had the cameras back in the day. And also, making things in subcultures is hard because they’re not very friendly to outsiders, so I was fortunate in that sense because I had people who would vouch for me. People would be more willing to hand over archives or to be involved, because people want to see things done the right way, especially in tight knit communities like the skate community.”
Of course, dealing with pre-digital archival material presented its own challenges, both in sourcing the footage and in the practical difficulties of working with the old formats.  “It was surprisingly hard, especially with some of the broadcast competition stuff. I thought that would have been easier to find, but it was quite buried. It wasn’t the big thing that it is now. It was a little bit more underground. The X-Games were just starting, so it was a little bit tougher to do. It’s also a little bit tougher to find tapes they might have in their garages on formats that don’t exist anymore – the old Hi-8s and all the old formats and that. We’d have to find old things that we could view it on or something like that. It was really quite a process.
“In the end we probably had around three to four hundred hours of footage, but we knew the story. It wasn’t so much finding the story, it was finding the moments or the elements to help tell that story.”
TRAVIS JOHNSON