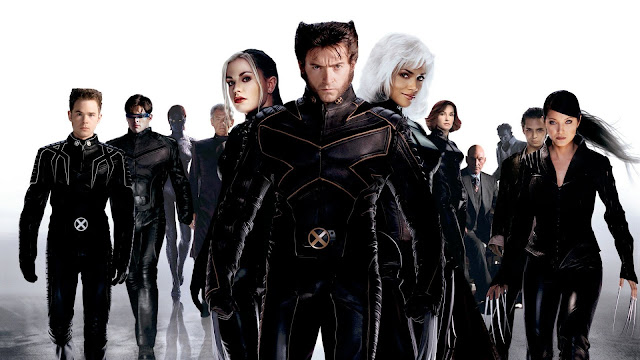 Three years on from the hugely successful release of X-Men – more than $296 million worldwide on a $75 million production budget, which screams “sequel comin'” in anyone’s language – Bryan Singer and pretty much everyone else came together again to return to the story of the bickering band of mutant outcasts sworn to defend a world that hates and fears them – and we are all better off for them having done so. X2 improves on its predecessor in every way.

This pretty blatant false flag operation prompts a retaliation from the powers that be, namely a military strike against known mutant hotbed, the Xavier School For Gifted Youngsters. They time it pretty well, too: Professor Xavier (Patrick Stewart) and Cyclops (James Marsden) are off visiting Magneto (Ian McKellan, who’s stewing in the plastic prison cell he was turfed into following his exploits in the last film), while Jean Grey (Famke Janssen) and Storm (Halle Berry) are off trying to find Nightcrawler.

Unfortunately for the commandos who chopper into the school with malice aforethought, there is one adult left on the grounds, and it’s Wolverine (Hugh Jackman), quite unhappy that his one lead on his mysterious past turned up nothing. When the student body comes under attack, Wolvie takes the opportunity to transform many of those commandos into rapidly cooling bodies, which seems a bit unfair as they’re trying to limit themselves to using knockout darts. Still, we the audience finally get to see Wolverine carve his way through a number of goons, which is a hugely satisfying if oddly bloodless (the movie is rated M here, PG-13 in the States).

Wolverine needn’t have worried, though: all this mayhem is down to General William Stryker (the great Brian Cox), anti-mutant hate machine and the man who recruited Wolvie into the shadowy program that both gave him his adamantium hardware and wiped his memory. He’s still using brainwashed mutants to do his dirty work, too – hence Nightcrawler’s cold open attack. This development gives Wolverine the opportunity to both resolve some emotional issues and save the world, as Stryker intends to wipe out mutantkind with a  Giant Machine To Kill Everyone*. Still Wolverine can’t do it alone (much as Fox would like him to be able to), and it’ll take the combined forces of Xavier’s peaceniks and Magneto’s By Any Means Necessary faction to put an end to Stryker’s genocidal shenanigans.

X2, or X-Men 2 if you prefer, feels like a greatest hits package, all killer and no filler. Fans of the Marvel comics were really well served by this one; the movie draws on mostly on the comics storyline God Loves, Man Kills, but there are nods to various plotlines and bits of continuity all over the place, from a list of familiar mutant names on a computer monitor, to Hank “Beast” McCoy cropping up on TV, to hints at the famous Dark Phoenix Saga**. There are more mutants, more action sequences, and everything feels bigger, brighter and more textured. Looking at the first film now, it seems fairly low key for a blockbuster; X2 feels epic, putting its characters through the wringer and grappling with themes that go beyond the rather prosaic good/evil dichotomy of its predecessor.

Politically, the film is really interesting. In X-Men, old Magneto had feet of clay, choosing to sacrifice Rogue (Anna Paquin) rather than himself to bring his plans to fruition. Here, he kinda has a point: there are authorities actively plotting mutant genocide, mutants are ostracised and mistreated, and his militancy feels like, if not a correct choice, then at least an understandable one. Still, he takes time to be at least a little evil, cattily telling Rogue that he and Mystique (Rebecca Romjin) that they “…love what you’ve done with your hair.”

But it’s Magneto and Mystique’s asides about mutant identity that really stick in the memory. When angry young firestarter Pyro (Aaron Stanford) introduces himself as John and the old rebel replies “What’s your real name?” that moment speaks volumes. Similarly, when the shape-changing Mystique, inhuman-looking in her natural form, tells the always-monstrous Nightcrawler that she doesn’t stay in disguise all the time because she simply shouldn’t have to, well, that’s one of the key themes summed up right there.

We also get a great bit of gay subtext when Bobby “Iceman” Drake (Shawn Ashmore) has to “come out” to his parents, who never knew he was a mutant. It’s played for uncomfortable laughs at first – his mother even asks if he’s tried not bring a mutant – before taking a rather somber turn when Bobby’s brother shops him to the cops. That leads to a standoff between Wolverine, Bobby, Rogue and Pyro on one side, and a group of highly twitchy and frightened cops on the other. This scene reads a lot differently these days, given the media attention on the shooting of unarmed black men by American police. What is striking, though, is how quickly the film pivots; the X-Men are representative of all minorities, all oppressed groups, a fact that goes some way to accounting for the franchise’s enduring popularity. You can actually feel the more radical elements inherent in the very concept straining against the innate conservatism of studio filmmaking, and it makes you wonder what an X-Men film would look like in the hands of a really radical filmmaker with an agenda and no oversight. It’s a pipe dream, but take a moment to ponder.

And now that moment has passed reflect on the fact that X2 gets to have its cake and eat it; its a great tentpole action movie that manages to smuggle in a heaping helping of subtext, too.  As an action movie, it is miles ahead of the first film.*** The action choreography alone is in another league entirely, be it the opening White House attack, the assault on the school, Magneto’s escape (the shot of Mags on a levitating metal disc while his deadly iron bullets orbit around him is one for the ages), or the battle between Wolverine and Lady Deathstrike (Kelly Hu) a mutant endowed with similar healing abilities as him, with claws to match. Put aside that this is another movie where Wolvie slices and dices a woman, it’s a bravura setpiece, with clear thought having gone into how two such powered characters might go at it. Similar thought is evident in the scene where the X-Men’s stealth jet dogfights with a couple of military fighters; we see Nightcrawler, Storm, Jean and, finally, Magneto all use their powers to great, thrilling effect.

Finally, when we get through all the bombast of the third act, X2 leaves us in a very different place than when we started. For one thing, Jean Grey is dead, having sacrificed herself to save the rest of the team. Pyro, angry young man that he is, has cast his lot in with Magneto, and it’s a shame we never actually got to see the character crop up again; the consequences of his actions would have been interesting to track. The X-Men have revealed themselves to the POTUS in an effort to prevent him from cracking down on mutants, in the process clearly demarcating Xavier’s mandate of peaceful co-existence and giving us a hell of a team shot. It’s a bold and dramatically satisfying arc that leaves us well set up for whatever the future of the franchise might bring.

…or so we thought at the time.

But that’s for next week. Rewatching X2, it’s remarkable how well it’s aged. While its action beats may not compare to what’s been wrought onscreen in recent years, it manages to juggle a lot of characters with conflicting agendas and contentious relationships, reflecting the soap opera dynamic of the comics. It feels like its about something; there’s a statement of intent here that feels earned, and if the series never quite capitalised on that statement going forward, the fact that it was even made is admirable. I wouldn’t quite call X2 the greatest superhero film ever made, but I certainly wouldn;t laugh at anyone who did, either.

*As I pointed out last time, this is an ongoing theme.
**In hindsight, that was a bit of a fizzle, wasn’t it?
***I feel like I’m bagging out X-Men a lot, when it’s a perfectly good film. Still, X2 is basically X-Men without the constraints, financial and cultural, that hampered the first movie, and it’s hard not to keep coming back to that.