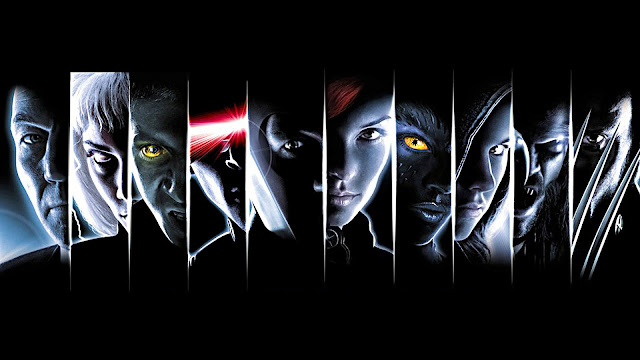 Bryan Singer’s X-Men was not the first superhero movie. It wasn’t even the first movie based on a Marvel property. But if it wasn’t the first pebble of the avalanche of spandex that we’re now being carried away on, it was certainly the first big boulder to land with a thud in our little cultural valley, causing us to look up to the mountainside and gawp at what was thundering towards us. No X-Men? No Spider-Man, Batman Begins, Iron Man, Avengers, Man Of Steel, Dawn Of Justice, so on and so forth.

Also, none of the stuff that’s grown in the loamy soil fertilised by the tentpole flicks: no CW DC Universe, no Watchmen, no Super (and then we’re doubling down on no Guardians Of The Galaxy, no 300, no Kick-Ass or Kingsman, no Hancock or Hellboy or The Green Hornet.* I’m making no claim as to quality of these things, mind you: I’m just saying that their existence, at least in the actual form that we got, is dependent on the success of Singer’s mutant movie.

So, with the original film turning sweet sixteen this year and Deadpool being way better than we had any right to expect and yet another chapter in the franchise – X-Men Apocalypse – later this year, it struck me as a fine time to look back on the series, movie by movie. Indulge me.

I think it’s best to assume we’re all down with the broad strokes, but just in case: set in the near future, X-Men portrays a world where mutants – humans who are born with or develop extraordinary powers – are becoming increasingly common to the point where their potential threat to public safety is being debated in the political arena. We’re introduced to two philosophically opposed figures, telepath Professor Xavier (Patrick Stewart), who seeks a path of peaceful integration between humans and mutants, and magnetism-controlling Magneto (Ian McKellan), who views mutantkind as humanity’s natural successor and wants to hurry the process along. He’s understandably gun-shy of political solutions to perceived “racial” problems – in the pre-credits sequence we see the young Magneto first manifest his powers while imprisoned in a Nazi death camp.

Stewart and McKellan are fantastic choices for these two key roles, each bringing considerable gravitas and nuance to the proceedings. One of X-Men‘s key triumphs is the way it takes its comic book subject matter seriously, and a lot of that is down to the casting of a couple of great thesps who can deliver the most tangled expository dialogue or doom-laden double entendre and make it sing. They’re also awfully old by the standards of modern franchise filmmaking – if you’re trying to make something that will generate sequel after lucrative sequel, the conventional wisdom is to cast young. If you;re feeling cynical, you can view their eventual recasting as a hedge against the inevitable end result of the ageing process disrupting the brand.

Still, great as they are, they’re not our POV characters – that’d be Marie, aka Rogue, played by Anna Paquin, and the real star of the show, Wolverine (Hugh Jackman). Rogue’s a young mutant on the run after her powers pop, she hightails it to the wolds of Canada  – because why not? – only to run into our man Logan, making coin by destroying guys in bare knuckle matches.

I remember the outcry when Aussie song and dance man Jackman was cast as Wolvie, a late replacement for Dougray Scott. Jackman was barely known outside of Australia, and fared little better on home soil, plus he was way, way taller than the old Canucklehead, a point that was apparently of no small import to a very vocal element of fandom. And maybe they had a point, although not the one they thought they were making: Wolverine is by far the most popular X-Men character, and if he didn’t work, in the context of the film if not as a direct mirror of his comic book self, this was going to be a disaster.

Luckily he did work, thanks to Jackman’s rather grounded but still ferocious performance, a wise decision to skirt around the character’s insanely convoluted backstory (Stewart sums it all up neatly, which is his main job in the film: he’s Basil Exposition in a wheelchair). He also gets a killer intro – we get told how badass he is before we see him, and when we see him he’s taking a dude apart in a cage match. Then he gets to look moody while drinking and smoking before slicing up a shotgun when he reveals his claws. He even has the weird sculpted hair** going on – this is our onscreen ‘rine, and he is cool as hell.

Introductions, indeed, are what this movie is all about. The plot itself is very straight forward: Magneto has devised a Giant Machine To Kill Everyone***, and he needs Rogue to power it. Technically its actual role is to turn everyone into mutants, but since that turns out to be fatal, as we learn when Bruce Davison’s anti-mutant Senator Kelly is subjected to the process, it’s really a doomsday device, and its up to the X-Men team to come together to defeat Magneto and his Brotherhood of Mutants.

While it’s fair to level the criticism that the X-Men brand is essentially The Wolverine Show (even in the movies he has appeared in every single installment in one form or another, including Deadpool), there are other characters here, and they’re sketched quickly and competently. Famke Janssen’s Jean Grey probably gets the best serve of screen time, given that she’s the object of Wolvie’s affection, although that dynamic is in its nascent stage here. Similarly, the best moments James Marsden’s Cyclops has spring from his rivalry with Wolverine, both romantically for Grey and, although not overtly, for leadership of the team. Sadly, Halle Berry’s Storm has no direct relationship with Wolverine, and so generally gets bugger all to do. She also gets one of the worst one liners of the series – you know the one. Poor Storm – they never quite figure her out.

On the flipside, the casting strategy for Magneto’s Brotherhood seems to have been based on getting people who can look like and/or do what their characters do, rather than on acting chops. Thus we get wrestler turned actor Tyler Mane as Sabretooth, effectively a monosyllabic Mirror Universe Wolverine, stuntman turned actor Ray Park as the venomous, agile Toad, and model turned actor Rebecca Romijn (then credited as Romijn-Stamos) as the shapeshifting Mystique. None of them have to do much heavy lifting in terms of drama and of the three, only Romijn returns. Interestingly, she kind of turns into the series’ political pivot point, but that’s something that emerges gradually, so we’ll address it down the track.

So the stage is set and the heroes and villains are defined and it all comes down to… well, some very low key action beats. Infamously, X-Men had a goodly sum of money torn out of its budget at the last minute and, although Singer and his team do very well with what they’ve got to work with, by modern superhero blockbuster standards the film looks almost quaint. The hand to hand fight choreography is notably dull, with lots of obvious wire work and a fairly sludgy pace to the proceedings. We do get to see everyone using their powers together, though, ultimately all in concert when the X-Men rescue Rogue from the Statue Of Liberty, where Magneto has secreted his doomsday machine. We also get to see Wolverine fight Sabretooth, which goes a long way to making up for the fact that, prior to that, he has spent the movie stabbing women (Rogue accidentally, Mystique on purpose).

It’s enough, though, and back at the turn of the millennium we were very happy with what we got: it felt like the X-Men. The key to the characters’ appeal has always been their outsider status – they protect a world that hates and fears them, and that’s rich material for anyone who has ever felt different (ie everyone) to plug into. Bryan Singer has said on numerous occasions that as a gay man those themes resonated with him, and when the film deals with notions of prejudice and systemic oppression it’s not being glib. The film treats thjis stuff with the appropriate gravity, rarely winking at the audience (the “yellow spandex” line punctures the fourth wall, but in a neat way) and setting up an interesting set of characters and situations that beg to be returned to. Perhaps its greatest strength is that it feels like a window on a larger world, and we want to see what lies outside the frame.

However, watching it now, some 16 years later, it is striking how coy X-Men is about its comic book origins. It’s worth remembering that just three years earlier Joel Schumacher’s Batman And Robin had torpedoed a thriving franchise, and the common opinion was that it had done so by being too gaudy and silly.**** Thus X-Men is careful to present itself as science fiction, not a super hero story: it;s set in the future, we are told, colourful costumes are dropped in favour of black leather uniforms, people have code names but not secret identities, and nobody has an origin story. These days we’ve fully embraced the more outre elements of comic book culture in our cinema – the freaking Vision turned up in Age Of Ultron, for crying out loud, but at the dawn of the Heroic Age, comic book movies kept their roots on the down low. How apt, then, that a movie about the X-Men would presage a gradual shift in attitudes, leading to the cultural landscape we inhabit today.

*Weirdly, we would still have 1999’s Mystery Men, a movie that came out before the genre it was parodying rose to prominence.

**It’s the least elaborate version of his hair that we get. Every movie has a slight variation on the Wolver-do, and it;s never justified in the narrative. I like to imagine he has a very patient barber.

***This is a recurring motif in the series.

****It is fucking weird to reflect on a time when we thought Tim Burton’s Batman was grim and serious.