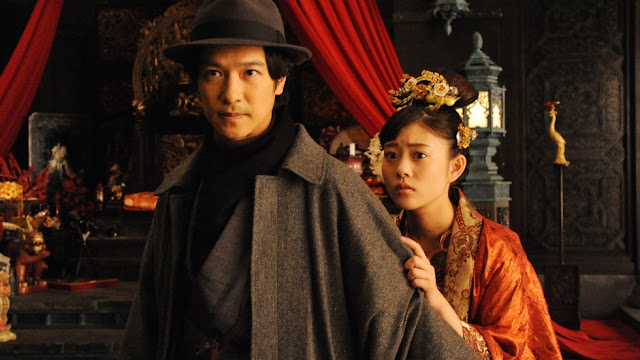 Written & directed by Takashi Yamazaki
Adapted from the manga by Ryôhei Saigan
When Akiko marries the mystery author Masakazu she leaves the city to live in the provincial town of Kamakura. At first, for Akiko, it is about discovering the mundanities of country-living and the idiosyncrasies of her new husband, but when she sees her first water sprite she becomes acquainted with the spirits and creatures that share the town with the human residents. Despite Masakazu’s warnings not to get too friendly with the strange folk of the night market, Akiko invites herself into their world and into the house. It’s fun and games regardless of the husband’s worry, but when a dark presence has plans and Akiko is taken to the spirit realm of the dead Masakazu must make his way to the netherworld to find her.
Destiny: The Tale of Kamakura is a gentle spectacle. It resembles Hayao Miyazaki’s delightful masterpieces My Neighbour Totoro and Spirited Away, but the mini-tales of loss, love, frogs, and friendship tilt more towards an adult appeal. For at its heart it is about a newly married couple still navigating their love around the strangeness of individual lives that seek a shared path and the various people – family, friend, and stranger – that constantly intersect from day to day. The spirits, ghosts, and assorted creatures help highlight the gentle trials of marriage even though it involves hauntings, body transformations, and mischievous monsters.
For a while, the story feels a little fragmented with these exotic tales that operate independently of each other, but when the malevolent make their move, it ties together to give Masakazu and Akiko the want and ways needed to face the ugly and powerful forces on the polar side of pleasant mundanity.
And what’s on the other side is glorious. You may have to wait for the visuals but when they arrive they are spectacular and sublime, enwrapped in a score by Naoki Sato that feels destined to be played in concert halls. The final act may come along as a sudden burst of fast-paced adventure after the seemingly meandering series of beguiling vignettes, but it is the lessons learn:ed – acceptance, understanding, and forgiveness – in our ordinary lives that gives love a strength and purpose so to face the biggest monsters that can block our destinies.
Destiny: The Tale of Kamakura is part of the Japanese Film Festival in Australia and is the opening night film in Adelaide, Brisbane, Canberra, and Perth. And, it is not to be missed.
ROBIN PEN